A fire that destroyed a Catholic church north of Edmonton early Wednesday morning is being considered suspicious by police.

Despite help from neighbouring community fire departments, the Roman Catholic church on Morinville's main thoroughfare had been badly damaged.

"The fire was already fully involved from the basement when the first fire crews got here. They entered the building but there was already collapse occurring on the inside of the church so they backed out and it's been a defensive or exterior fire fight ever since," Iain Bushell, the town's general manager of infrastructure and community services, told CTV News Edmonton at the scene.

"It's one of the largest buildings. It's very old construction so an awful lot of wood, so it went very quickly and it was a very difficult fire to fight," he said, thanking crews who came to help from Legal, Bon Accord, Gibbons, Sturgeon County, St. Albert and Edmonton.

In total, about 50 firefighters were on scene at the peak of the fire fight. They rested in rotations during the exhaustive response in the morning and in anticipation of high temperatures later in the day.

Aside from some smoke and water damage sustained by a neighbouring building – which was once a convent and now hosts 38 apartment units as well as a museum – no other property was damage.

According to town officials, about 50 people were displaced by the apartment evacuations. Those who needed it were being sheltered at the community legion. Bushell said they could be out of their homes for 48 hours.

Morinville is some 30 kilometres northwest of Alberta's capital city.

RC Church in Morinville, AB this morning around 0445/0500 as seen from Hwy 2 heading to Edmonton! pic.twitter.com/JnBi0yKh1S

Across the street, local residents watched as a century of history crumbled before their eyes.

Construction on the church finished in 1907 and it hosted its first mass on Jan. 1, 1908. It was named after Father Jean Baptiste Morin, who led several Francophone families to the Morinville area from Quebec in 1891.

"I don't think I'll really be able to believe it's happened until the smoke's settles. Like, until it's all done. It really is. It's the centre of this community," Angela Meyer commented.

Another Morinville resident, Roger Morin, was married in the church 42 years ago on June 30. His wife passed away from cancer earlier in 2021.

"I've had a very important loss in my life already, and this is all part of it," he said.

"I really don't know how to feel. I just feel sad. Sad as hell." 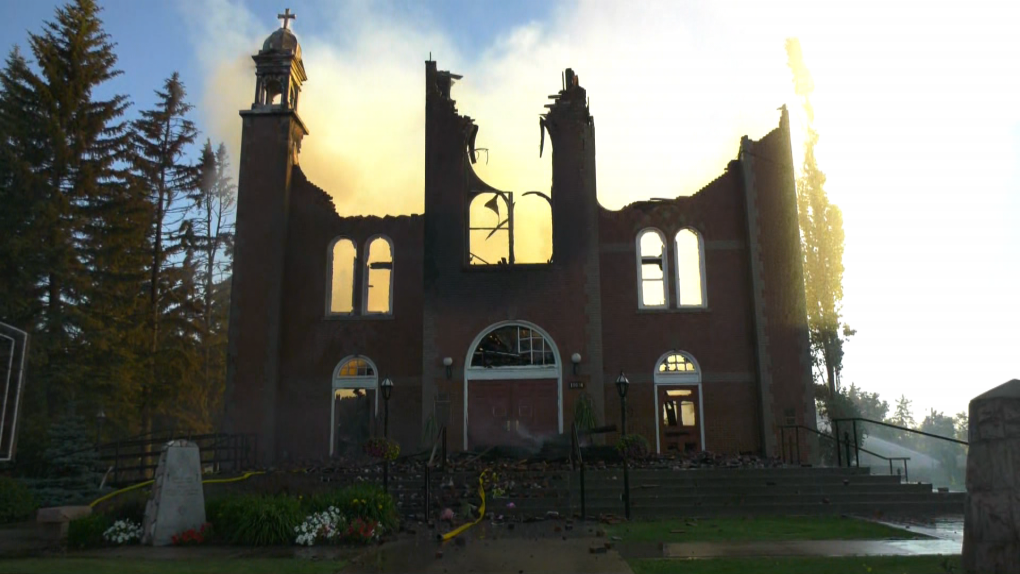 St. Jean Baptiste Parish, a Roman Catholic church on Morinville's Main Street, was badly damaged in a fire on June 30, 2021.

"What's happened is a terrible, terrible and tragic event for our community," the town's mayor, Barry Turner, said during a noon news conference.

"One thing I know is that our community has amazing strength and resilience and banded together, numerous times, and will do so again. ... And we will. We will rebuild, and we will recover."

Alberta Premier Jason Kenney went out to the site Wednesday afternoon to condemn what he coloured as another appalling hate-motivated crime against the Catholic community.

"I realized this morning that if a minority faith group had faced an apparent act of violence like this, I would absoltuley have been on the spot immediately to show solidarity and so I felt it was neesary to do that," he said, standing in front of the church's rubble with Justice Minister Kaycee Madu and the area's MP and MLA.

Kenney also announced a doubling of funding available to religious and cultural organizations wanting to install security equipment, and urged "promoters of hatred and division" to see that recent acts of arson at churches across Canada "is not reconciliation."

Officials have not said how the fire was started but Mounties did call it suspicious, as did town officials.

Across the country, several Catholic churches have burned to the ground or been vandalized after hundreds of bodies were found at former residential school sites in B.C. and Saskatchewan. Five B.C. churches have been the scenes of fires, and one of two fires at churches in the Calgary area is believed by RCMP to have been deliberately set. A statue outside Edmonton's Polish Catholic Church was vandalized with red paint.

"Certainly the timing is unfortunate given what is happening in the country at the moment and it being a Catholic church, but again, I'll let the fire investigator get into that properly," was all Bushell would say.

At a special council meeting, the town also decided to cancel its Canada Day festivities. Instead, the community's cultural centre will be open for residents to gather and get support.

NATO declared Russia the 'most significant and direct threat' to its members' peace and security, as the military alliance met Wednesday to confront what NATO's chief called the biggest security crisis since World War II.