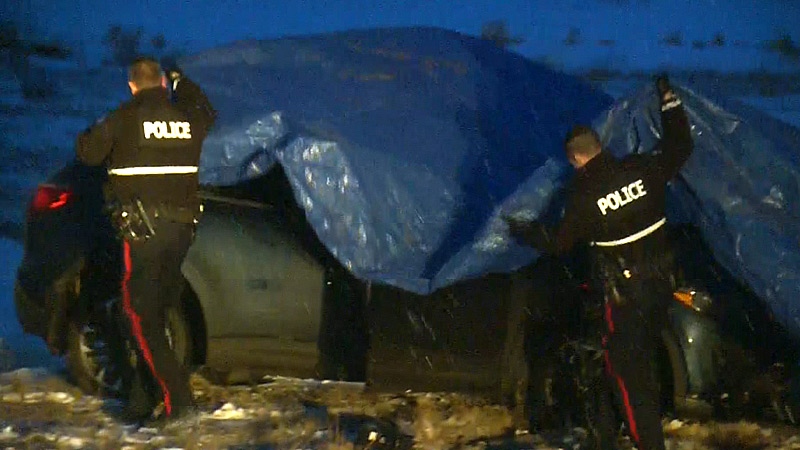 Charges are still processing against the five individuals involved in last week’s crime spree in the Manning Drive area, and the 38-year-old man who sustained a gunshot wound remains in the hospital in stable condition, Edmonton police said.

The series of crimes started in Fort Saskatchewan on March 28 when two men threatened a woman at knife point and stole her Ford Escape at 4:30 a.m.

Later that day in Edmonton, two men were abducted at gunpoint from a residence in the area of 106 Avenue and 123 Street by a group of individuals, police said. They were assaulted and robbed before escaping with non-life threatening injuries.

Police spotted the stolen vehicle believed to have been used for the kidnapping meet up with the SUV stolen in Fort Saskatchewan at about 10:30 p.m.

The two vehicles were seen driving north on Manning Drive, north of 153 Avenue, when one of them engaged in a road rage incident with a third vehicle, EPS said.

The bystander was attempting to make a left turn when he was shot – which made him lose control of his vehicle and end up in a ditch off of Manning Drive and 18 Street, police said.

The two vehicles fled the scene and headed north towards Gibbons, where police deployed spike belts. One of the vehicles broken down, and all the occupants got into the other stolen vehicle.

The five individuals drove back towards Edmonton on Highway 28A on a vehicle running on rims. A short time later, EPS stopped the vehicle and arrested three minors and two men.

Police said more information will be released later this week after charges are processed.