Some cheerleaders and parents from two Edmonton Public Schools are frustrated with the district after they were not allowed to attend a competition in person this weekend.

During the current fifth wave, EPSB says inter-school games are allowed, without fans, but tournaments and field trips are postponed.

EPSB informed teams they would not be allowed to go to the Expo Centre because Cold Snap is a tournament not organized by the school division and it allows spectators, "which does not align with our current protocols."

They cited concerns with students interacting with other cohorts of students and schools, where the risk of COVID-19 transmissibility would be higher. EPSB added that these restrictions have been in place since the return from winter break.

Like so many times in the pandemic, the teams were asked to settle for the online experience.

Every team that signed up was at the Expo Centre, but D.S. MacKenzie and Harry Ainley participated from the high school's gym and livestreamed the performance to family and friends, and the Cold Snap judges back at the competition venue. 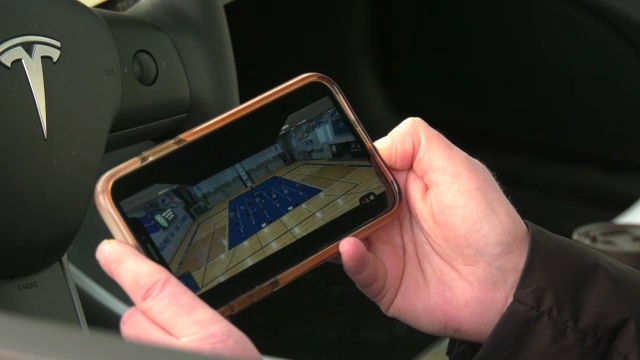 A parent was upset she had to watch the competition on her phone in her car. Jan. 22, 2022. (CTV News Edmonton)

"All the kids were extremely upset," a mother watching her daughter on her phone in her car outside the gym told CTV News. "They've had so much taken away from them."

A Cold Snap event producer told CTV News the event is following Alberta's Restrictions Exemption Program with 50 per cent capacity in the stands, and added some teams decided to wear masks while they compete.

"Any of our teams are a little bit more spread out than normal in terms of the time they're taking the floor, which then also spreads them out in the back in their warm up, as well as when they and their parents are coming into the building," Kim Fiissel said.

"When we have a crowd, it is so much more fun. They feed off of it, athletes are super excited to show their family and friends what it is that they have been working on, and it just makes everything so much more fun. But sometimes we have to take what we can get and if all that we're able to do is compete virtually, we'll take that too at times, because the main thing is to get these kids moving, get them active and give them hope for what is in the future, and to keep them engaged in sport."

The online experience was difficult for athletes and parents alike.

For some children, it was their first time ever competing, and their parents weren't there.

"It was a little weird," a Grade 7 student told CTV News.

A parent, who said it was "heartbreaking" the teams couldn't compete in person, questioned the fairness of online competition.

"You can't see anything. You can't see who's who. You can barely see which team is which," said Martin Nagy. "They're supposed to be judging this from Expo through the camera. If I can't tell who's who, I don't know how they're doing the judging."

Cheerleaders and parents hope this is the first and last virtual performance as the season gets underway.

Thunderstorms kill 3 in southern Ont., knock out power in parts of Que.

As the May long weekend kicked off, a massive thunderstorm in southern Ontario and Quebec brought strong wind gusts that knocked down trees, took out power and left at least three people dead.