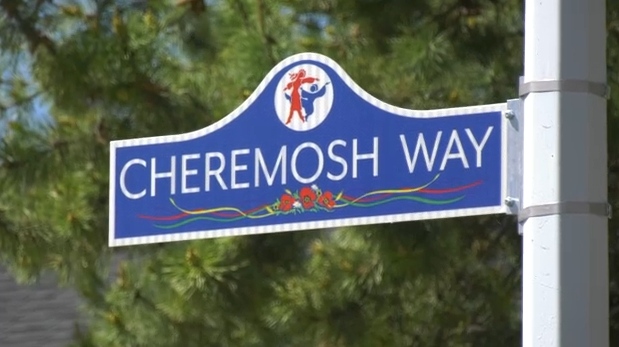 A new street sign bearing the new name for 40 Street from 114 to 118 Avenue in honour of the Cheremosh Ukrainian Dance Company (CTV News Edmonton/Dave Mitchell).

A street in north Edmonton will bear the name of a Ukrainian dance company to honour their more than 50 years worth of contributions to the local arts and culture scene.

In Beverly, 40 Street from 114 to 118 Avenue will now be known as Cheremosh Way, after the Cheremosh Ukrainian Dance Company.

Tammy Greidanus, Cheremosh alumnus and organizer of Saturday's event celebrating the accomplishment, explained that the dance company takes its name after the river running through the Carpathian Mountains in western Ukraine.

"In the Canadian context, it actually means our group has brought international recognition to Edmonton as an Edmonton-based group and it means boundless energy, and it means also a recognition of excellence in Ukrainian dance artistry," she told CTV News Edmonton.

"It feels very cool for the group to have this recognition," Greidanus added.

The dance group has 150 current members and more than 500 alumni since its founding in 1969 by Chester and Luba Kuc, Beverly residents and community advocates.

When asked how Cheremosh would celebrate the street renaming, Greidanus said the group would do it in the best way it knows: dancing.

"We are going to join in a circle dance, which is called a kolomyika, and we are just going to generally enjoy some time together," she said.