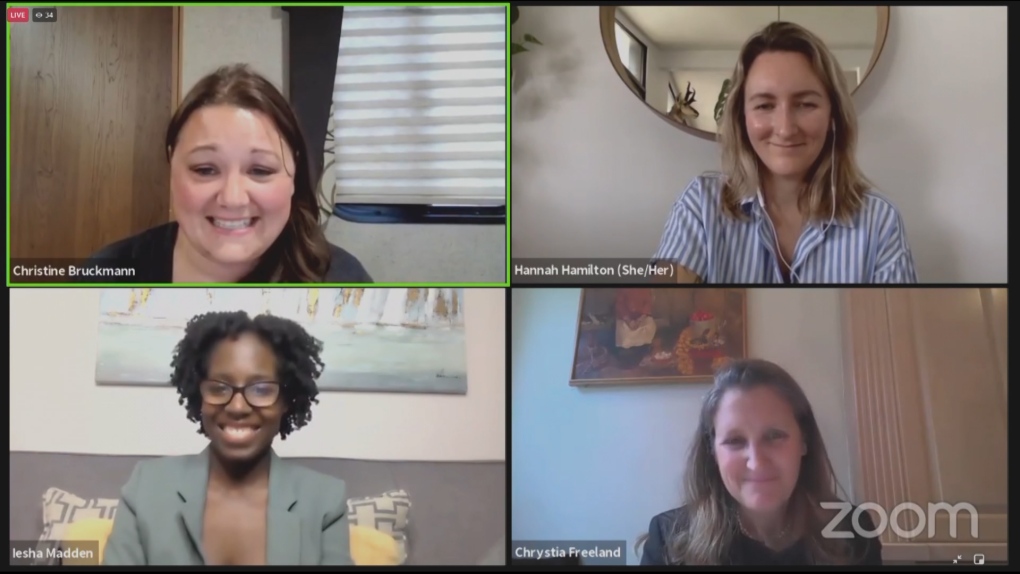 The federal government plans to spend $30 billion over the next five years to make their universal national child care program a reality.

B.C. and Nova Scotia have already signed on to the plan and Freeland hinted that more provinces may soon follow.

During the livestream, Freeland spoke about growing up in Alberta and about her Baba (grandmother) taking care of her as a child while her mother was in university.

Then in turn, her mother retired after Freeland's first child was born to help with child care.

"She didn't want me to stop having a career and she was worried that I wouldn't be able to do it, based on how hard it had been for her."

Freeland says women often choose to take a long career break after maternity leave because the cost of child care equals or is greater than the amount of money they're taking home from their job.

"That shouldn't be a path you're forced to choose because of economics," said Freeland.

The minister explained Quebec's $10/day child-care system resulted in the province going from having the lowest participation of women in the workforce to the highest.

"I'm not saying let's look at what's happening in Scandinavia guys, or some other place. We just have to look in a part of Canada that's done it."

Ottawa and Alberta are currently negotiating to bring the program to the province.

Premier Jason Kenney has called the program an "Ottawa-style cookie cutter program" and that he doesn't think it satisfies the demands of Albertans.

By having women back in the workforce by way of universal national affordable child care, Freeland says the program would pay for itself almost immediately.

The budget has a portion earmarked for programs and supports for children with disabilities.

Freeland says that each province and territory can decide how they want to distribute the money allocated to them. However, provinces and territories need to show what targets they're going to meet in order for the federal government to give them the money.

She said in negotiations provinces and territories can also decide how to set the times for child care, saying it won't be all 9 a.m. to 5 p.m.

However, Freeland says that people need to be patient, as changes won't be immediate.

"This is about building a system, and it's going to take some time. I believe that as we build it, there will be rewards and benefits for parents right away, but we're not going to be able to get to $10/day immediately. That will take five years."

Freeland says the federal government is all in on its plan for universal child care, and now it's up to Albertans to let the province know that they want it too.