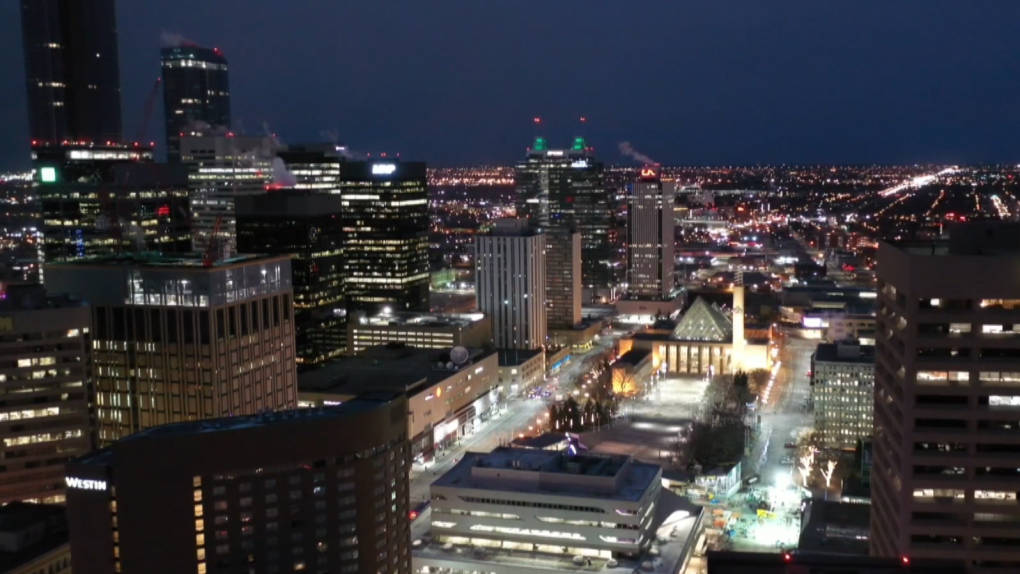 The city says its new downtown vibrancy strategy will use $5 million to support businesses, visitors, employees and residents of downtown. (File Photo)

EDMONTON -- The City of Edmonton is launching a two-year strategy meant to re-energize its downtown core as it prepares to emerge from the COVID-19 pandemic.

The city says its new downtown vibrancy strategy will use $5 million to support businesses, visitors, employees and residents of downtown.

"We know that COVID has hit our downtown in a way that's more pronounced than in other parts of the city," deputy city manager of the urban planning and economy department Stephanie McCabe told CTV News Edmonton on Wednesday.

"We also know the importance of downtown from an economic, cultural, and social perspective to Edmonton as a whole," she added.

According to a city report, "downtown has been negatively and disproportionately impacted by COVID-19."

That report states that as many as 60,000 office workers are now working from home, and roughly 35,000 post-secondary students have moved to online learning.

"We know that not a lot of people have been visiting downtown, that there haven't been a lot of festivals in the last 15 months," said McCabe, "and so the idea is to welcome Edmonton back to downtown."

According to McCabe, the $5 million will be used for "activating downtown."

She said the city is encouraging a number of festivals to come back to the area in the hopes that more people will decide to come back to enjoy the city's core, "especially through the summer."

"The $5 million is really meant to leverage other dollars," said McCabe. "We know that there's private investment going into downtown as well as other levels of government investing in our downtown."

"We're going to look at ways to encourage retailers to stay in the downtown," she said. "We're going to do a promotion campaign about downtown and how important our downtown is for the City of Edmonton."

Other examples of uses for the money include the enhancement of safety in the area, and improving the appearance of vacant lots.

The city is working with partner organizations like Explore Edmonton and the Downtown Business Association (DBA) to help determine the best way to activate downtown using the $5 million.

"This is the city showing up in a big way for downtown," she added, "putting a plan in place, bringing together all of the different partners that have a role to play in downtown vibrancy."

McBryan said, while the funding for the vibrancy strategy is appreciated, she still worries about the long-term impact COVID-19 will have on Edmonton's downtown.

"We won't really know what happens to office vacancy rates and retail vacancy rates and all that kind of stuff until the dust settles," she said. "Once the rent subsidies and the wage subsidies end, once we really get a sense of how many people are working remotely on a more permanent basis.

"2022 will be a much more realistic look at what the future of downtown Edmonton looks like."

McBryan pointed out that the DBA's $1 million annual budget is typically put toward the same type of work described in the city's vibrancy strategy.

"And then there's of course all the private sector support," she said. "A lot of our large employers downtown are very keen to also play a part in this.

"I think there are other partners who have a very vested interest in the success of downtown Edmonton."

The DBA executive director echoed the city's sentiment that attracting people back to the downtown core will be key to rebooting the area.

"I don't know that enough Edmontonians realize how major a role downtown plays in funding services and the operation of the entire city," said McBryan.

According to McBryan, the area of the DBA makes up eight per cent of the city's entire tax base, while accounting for less than one-half per cent of the geographic area.

"That $5 million investment to retain the prosperity and retain that assessed property value, so that we can still keep contributing the taxes that we do as a downtown," she said, "it's really important."

The city had previously budgeted $271 million for a long list of projects meant to improve its downtown. Funding for the downtown vibrancy strategy will draw from that budget.

"It's going to make a really big difference in the short-term," said McBryan.