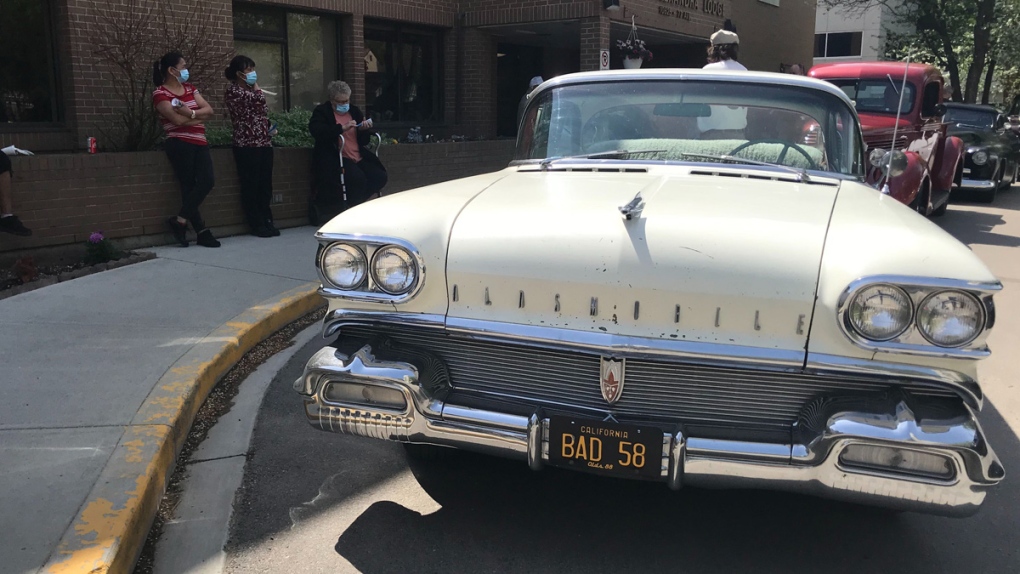 More than 15 classic vehicles drove around the Queen Alexandra Lodge to offer residents a look at some of the rides from their past. May 29, 2020. (Brandon Lynch/CTV News Edmonton)

EDMONTON -- A group of classic car enthusiasts gathered on Friday afternoon to showcase their rides for some local seniors.

Over 15 cars and trucks — some models from as far back as the 1930s — drove a couple laps around Queen Alexandra Lodge offering the residents a look at some of the vehicles they remember from their past.

The genesis of the idea came from one of the residents reminiscing about his old vehicle, a 1957 Oldsmobile. Greg Mottl was helping out at the lodge when he was inspired to make a car show happen.

“I just thought it would be really nice to start doing something just to help lift peoples spirits and I just thought the car show would be a great thing.”

Mottl contacted Ryan Rexin, a car enthusiast from north of Gibbons, and the owner of a 1958 Oldsmobile.

“It kinda started as I was just supposed to pick him up and take him for a ride and then it sort of snowballed into why not get a bunch of cars to do a couple drive buys.”

Rexin explained why he wanted to be a part of the event.

“It’s fun. It’s what the cars are for. It brings memories back to people, just the smiles on peoples faces... it’s a lot of fun.”

Mottl echoed Rexin’s enthusiasm, saying, “It made my day,” and adding, “just to see the look on everyone’s face, it’s wonderful. I definitely want to be doing this more.”

Mottl says he is also trying to get in touch with different performing artists to provide outdoor entertainment to different senior’s homes around the city.