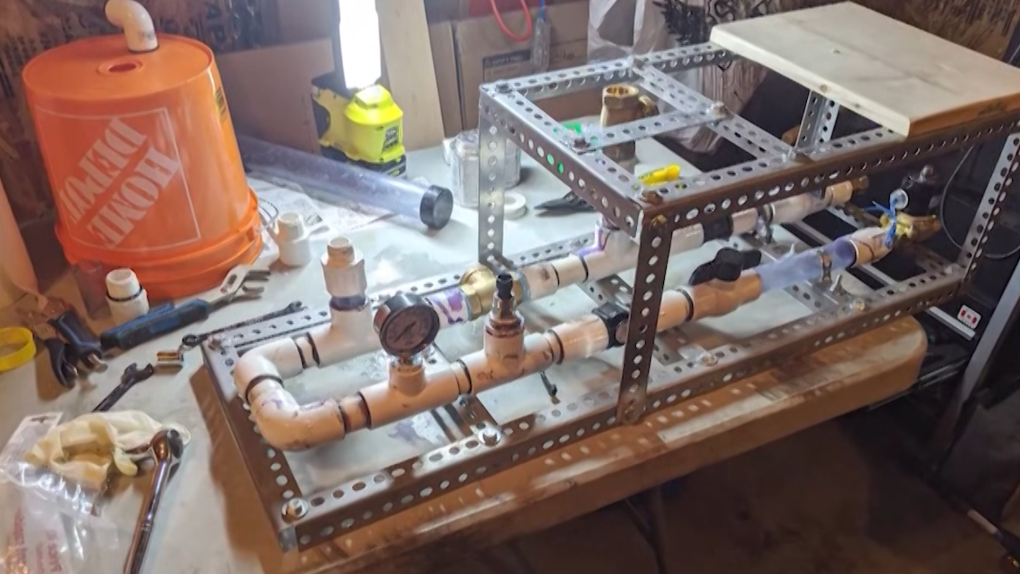 A project by students at Red Deer College won the Capstone Project of the Year award. (Source: Association of Science and Engineering Professionals of Alberta)

EDMONTON -- Students from Red Deer College were the winners of the Capstone Project of the Year award.

The four, now former, students, were chosen for their innovative addition to a centuries-old design, the ram pump. It was the end-of-term project for Tyler Podgorenko, Michael Nosterud, Spencer Otto and James Greenough.

“All of a sudden it occurred to someone, one of our brilliant students who was experienced in these things, that you could add a Pelton wheel to it and generate electricity from it,” said Barry Cavanaugh, the CEO of the Association of Science and Engineering Technology Professionals of Alberta (ASET).

“The potential for it is enormous.”

According to ASET, the ram pump has been used since the time of the Roman Empire. The pump used the potential energy of flowing water to pump the water to a higher elevation.

The new renewable energy device harnesses kinetic energy from a turbine and converts it into mechanical energy that’s stored in a connected battery to be used as needed. The resulting clean electricity is created without pollution, according to ASET.

The group wanted to use the technical knowledge they learned in school to modernize the age-old invention.

Adding the technical aspects we used in school, like pressure sensors, flow sensors and solenoid valves, really gave the ability to add more description and just more knowledge and technical aspects to the already original process,” said Tyler Podgorenko, one of the winners.

The pump could be used for numerous applications, such as generating electricity for rural housing, livestock operations and providing water access in Third World countries, according to ASET.

The Capstone Project of the Year was started in 2017 by ASET. Seven other finalists from NAIT, SAIT, Red Deer College and Lethbridge College were also in the running for the award this year.