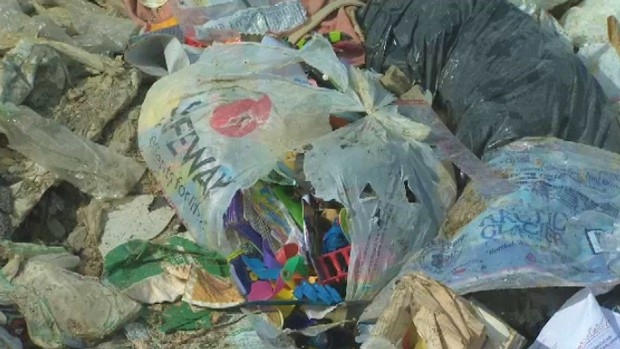 Thirteen years after closing to the public, Edmonton's Clover Bar landfill continues to release methane fumes, with plans to implement capture technology converting them into renewable biogas moving ahead.

It was able to operate for 20 years longer than planned after recycling programs were brought online, finally closing in August 2009 after reaching full capacity.

According to the city's proposed waste services capital funding request for this budget cycle, safety and environmental enhancements to the landfill site need to be constructed, including erosion controls and a cutoff wall to prevent leaks into the North Saskatchewan River.

A landfill gas collection system has been in place since 1992, the capital profile report for the project notes. It is currently owned and operated by Capital Power under a contract that ends in 2024.

The city will take back control of the gas conversion site, but a condition assessment shows it needs upgrades to meet minimum environmental regulations.

The proposed utility budget calls for $16.7 million to upgrade the landfill gas collection and flare system. Capital Power will fund $4 million of that project and the city will leverage a provincial grant for $10 million.

The city will contribute $2.7 million, with the remaining $14 million will be "funded externally."

Once operational in 2024, the city anticipates it will produce approximately 325,500 gigajoules of renewable natural gas annually.

According to city administration, council heard about the project in private since disclosure of discussions could harm "economic and other interests of a public body."

While specifics of what was discussed at that meeting are not known, some form of the project update required council approval.

When asked by Mayor Amarjeet Sohi during open utility committee proceedings what actions the city could take any action to "expedite" progress on addressing the city's climate change and resiliency goals, Denis Jubinville, waste services manager, pointed to capping the landfill.

"Likely the largest impact we can have on our region is capping the Clover Bar Landfill," Jubinville told the committee.

"We know there's very harmful landfill gas that's able to escape through the top of it," he added. We need to cap it. We need to put three feet of clay on top of it. And so that's what we are doing with our, I guess, landfill gas system that we are putting in place in the coming two years."

"That will be a significant reduction in greenhouse gas."

A powerful 7.8 magnitude earthquake rocked wide swaths of Turkiye and Syria early Monday, toppling hundreds of buildings and killing more than 1,300 people. Hundreds were still believed to be trapped under rubble, and the toll was expected to rise as rescue workers searched mounds of wreckage in cities and towns across the area.

Retirements, high training costs and poor pay are fuelling a pilot shortage in Canada, industry analysts say, at a time when travel has surged in the wake of the COVID-19 pandemic.

Experts say the outlook for the loonie in 2023 largely depends on commodity prices, how the U.S. dollar fares, and whether central banks are successful in avoiding a major recession.

China accuses U.S. of indiscriminate use of force over balloon

China on Monday accused the United States of indiscriminate use of force in shooting down a suspected Chinese spy balloon, saying it 'seriously impacted and damaged both sides' efforts and progress in stabilizing Sino-U.S. relations.'

BoC's first summary of deliberations coming this week. Here's what to expect

The Bank of Canada is set to publish its first summary of deliberations Wednesday, giving Canadians a peak into the governing council's reasoning behind its decision to raise interest rates last month.

Beyonce sits alone atop the Grammy throne as the ceremony's most decorated artist in history, but at the end of Sunday's show it was Harry Styles who walked away with the album of the year honour.

Charles Kimbrough, a Tony- and Emmy-nominated actor who played a straight-laced news anchor opposite Candice Bergen on 'Murphy Brown,' died Jan. 11 in Culver City, California. He was 86.