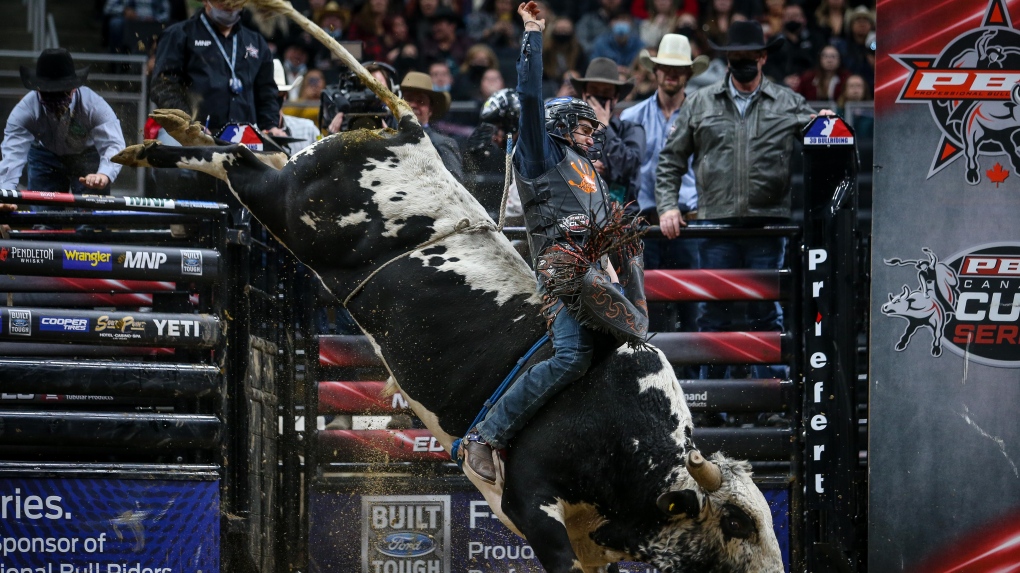 The world’s best bull riders competed at Rogers Place for the 2021 championship and $50,000 prize. The event featured four rounds of bull riding, with the first two taking place on Friday and the final rounds on Saturday.

Coverchuk rebounded from a 0-for-2 showing on the first day of action and delivered under pressure, scoring 89.5 points to surge to the third spot on the event leaderboard.

Dakota Buttar, from Kindersley, Sask., was ahead of Coverchuck in the standings for the weekend but could not finish the competition due to a groin injury. Buttar held on to second place in the national standings.

Swearingen then scored the top-marked ride on Canadian soil of the entire season after garnering 91.5 points as he challenged Happy Camper. The New York native gathered 151 national points total to grab ninth place overall in the national standings.

The rest of the top five in the event standings included Todd Chotowetz, from Major, Sask., Coverchuk, Lambert, and a two-way tie for fifth with Edson, Alta., resident Michael Ostashek and Tim Lipsett, from Lumsden, Sask.

Happy Camper, from Two Bit Bucking Bulls, won the country’s PBR Bull of the Year award for the second year in a row — the first bovine athlete to do so in Canadian history.

The remainder of the convoy of truckers and other activists opposed to the cross-border mandates is set to roll into Ottawa on Saturday in time for a rally on Parliament Hill.

NEW | Ahead of trip, Anand says all military aid options to Ukraine still on the table

Defence Minister Anita Anand says Canada remains open to enhancing military aid to Ukraine amid rising tensions with Russia, a message she will convey to her Ukrainian counterparts during an upcoming trip to the country.

Latvia is crossing its fingers that it is up next after Prime Minister Justin Trudeau announced this week that Canada is extending and expanding its military mission in Ukraine in response to concerns about Russia.