Collision on Hwy 21 leaves one dead 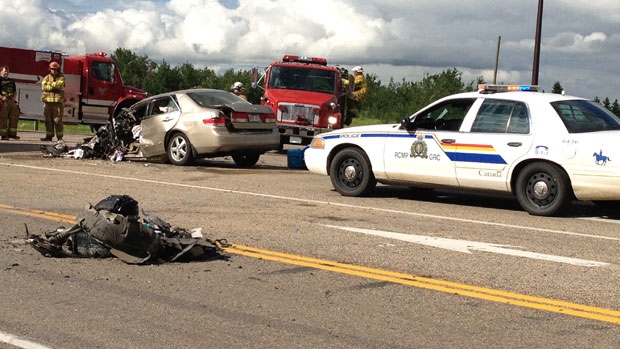 Emergency crews on the scene of a fatal crash on Hwy 21 near Delburne, Alta on Tuesday, June 19.

RCMP are investigating after a crash on the highway east of Red Deer left one dead, and another in hospital Tuesday afternoon.

Investigators on the scene told CTV News emergency crews had to use the Jaws of Life to remove both occupants of the car - the 79-year-old female driver died in the crash, and her male passenger was taken to hospital in Red Deer.

Since being rushed from the scene, the passenger has been airlifted to the Foothills hospital in Calgary with serious injuries.

The driver of the truck was not injured.

Three Hills RCMP said alcohol is not believed to be a factor, but the highway was closed for several hours while police investigated.