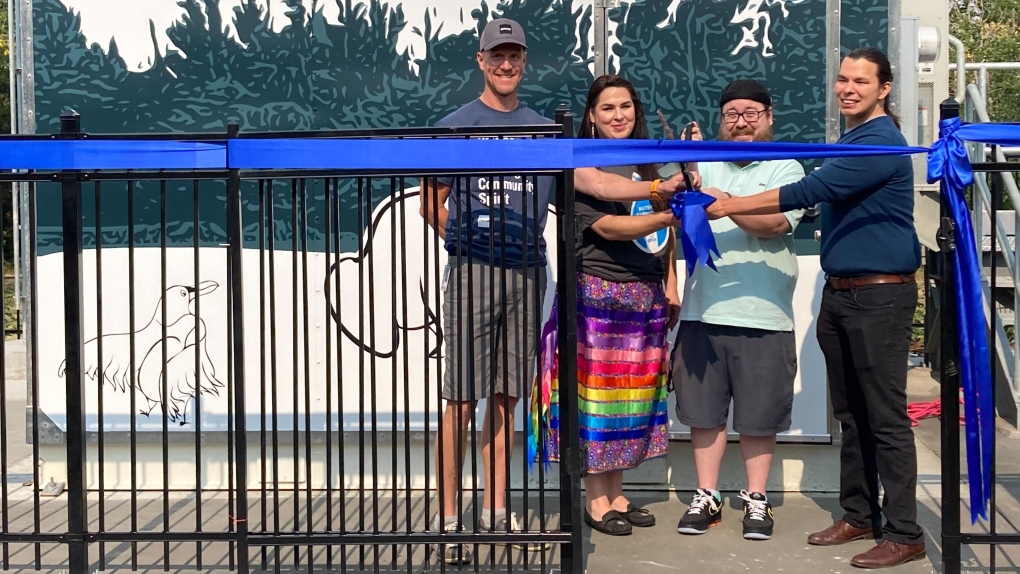 Artist Matthew James Weigel (center-right) said he wanted to create a piece of art that would center around the land that it was on, and incorporated the natural landscape into the piece. (CTV News Edmonton/Brandon Lynch)

Two new pieces of art were unveiled in Edmonton today, each bringing a different perspective to public spaces in the city.

In Gold Bar Park, a new piece of art by Indigenous artist Matthew James Weigel was celebrated Saturday afternoon with a ribbon-cutting ceremony. The piece was commissioned by Epcor to be installed at the new ambient air quality monitoring station in the park.

Weigel designed and created the mural applied to the building with a wrap. The piece uses the natural landscape, with the silhouette of the trees behind the station incorporated into the mural – something Weigel said centers the piece in the space.

"With this mural it was important to tell a story related to the land, and especially one that centers the treaty relationship," he said. "So by having this story of magpie and the buffalo and the story of their presence on the land, I'm able to tell those stories."

Any opportunity to bring art to a space is meaningful, Weigel added, but even more so when there is a chance to tell stories from an Indigenous perspective.

"Honestly, it's so amazing," Weigel said. "When I started doing art professionally it was never something that I thought I would be able to do, to have my art on a building this size and have this many people see it. 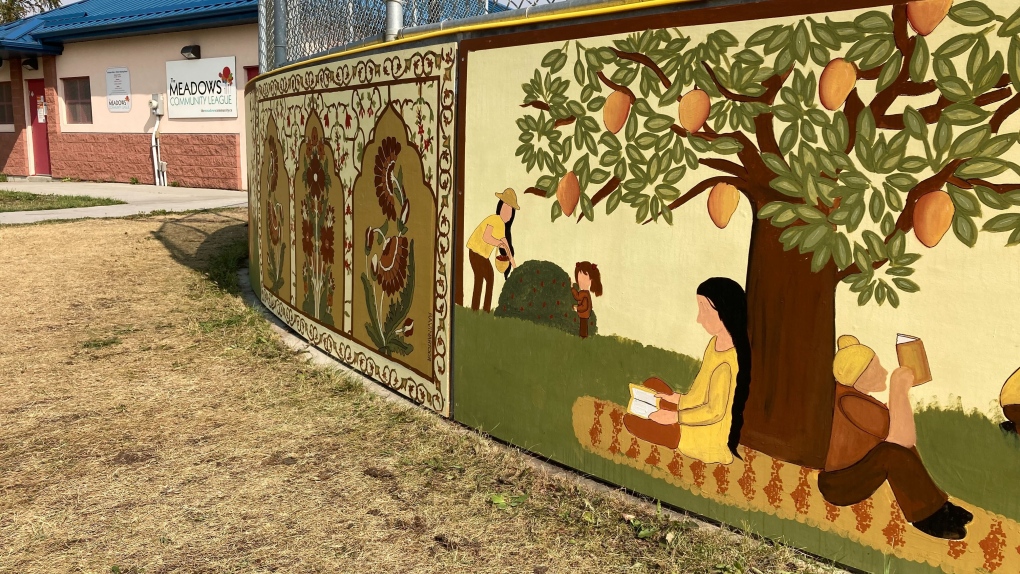 Artist Ravina Toor said she's always dreamed of creating a mural in the city and using her art to help others see themselves in public spaces. (CTV News Edmonton/Brandon Lynch)

Ravina Toor, the artist behind a new set of murals in Larkspur Park, is also appreciative of the opportunity to create art and bring a different perspective to public spaces.

"Growing up, I was one out of three brown kids in my elementary school," Toor said. "So just not seeing representation is always something that I've always wanted to focus my artwork on.

Her work is centered around community and diversity, and Toor collaborated with local kids from the community to create a mural for The Meadows Community Recreation Centre's garage and the skating rink.

During two workshops, Toor said the project centered around themes of belonging, diversity, nature and community. She adds that the mural is inspired by what the children drew, with one of the panels featuring the kids' actual artwork.

"I think the most rewarding feeling is having kids feel connected to artwork and the community around them and to feel a sense of belonging which is really important," Toor said. "And not just the kids, but like new immigrants, people who have been here for a long time but haven't seen themselves in artwork around them."