A public school southeast of Edmonton sustained only minor damage after flames broke out on its roof on Wednesday night.

Fire crews responded to Central High Sedgewick Public School just after 8 p.m. after reports of smoke coming from the building.

"I saw this enormous black plume with orange flames licking from it and my heart just sank," said Sedgewick Mayor Perry Robinson.

Robinson says about 30 firefighters responded from as far away as Hardisty and had the flames put out in quick order.

"For us to unite and save one of the most important buildings that we can possibly have ... the feeling of gratitude and thankfulness among all of us ... I don't know if I can find the words for it," said Robinson.

Crews determined the fire began on the roof where resurfacing work had been taking place, but investigators are working to determine the cause.

"The community of Sedgwick is extremely grateful right now," said Robinson. "To lose our school would've been a disaster politically, on a human level [and] for the whole greater area."

The school board says there's little actual fire damage to the school, but some elementary classrooms and the gymnasium sustained water and smoke damage.

"It's something that could be fixed by renovative measures instead of reconstructive measures," said Robinson. 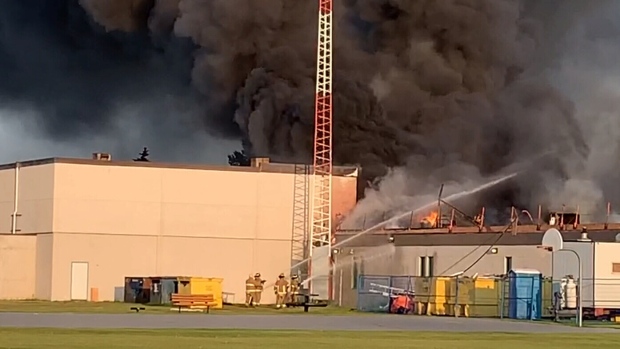 The school board says it expects the facility to be open on Sept. 3 as scheduled.

"What we don't know at this point is exactly what elementary school classrooms are available," said Diane Hutchinson with the Battle River School Division.

The school may consider options like portables if the classrooms aren't ready for students returning.

"We can't say yet what the timeline or path of repair is" said Hutchinson.

She says the school hosts about 430 students who come from several communities in the Sedgewick area.