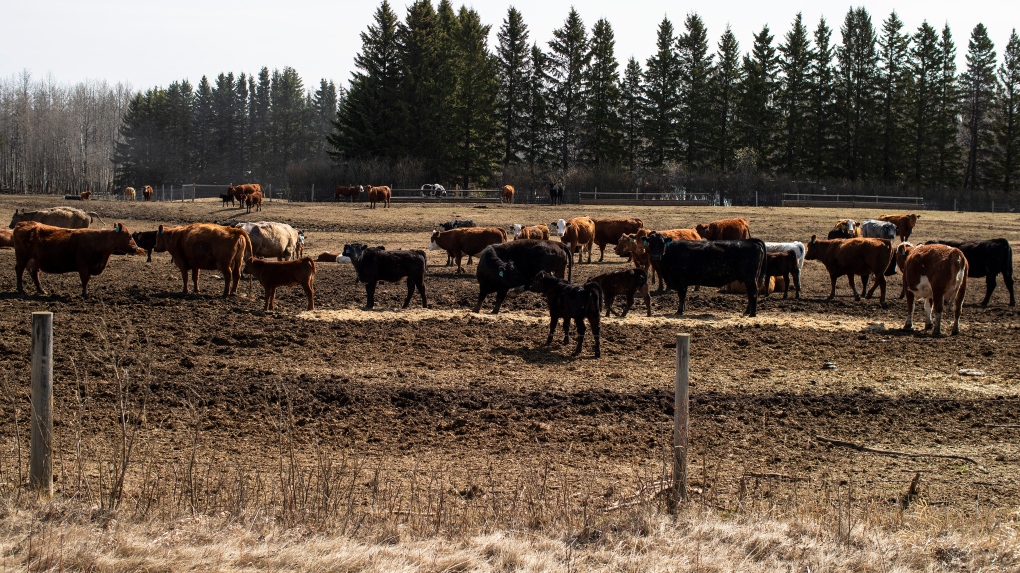 attle roam in a filed where there will be a potential feedlot near Pigeon Lake Alta, on Sunday May 1, 2022. 2022. Thousands of Alberta cottagers and homeowners are waiting nervously to see if a provincial regulator will allow a large feedlot to be developed near the popular and environmentally fragile recreational lake. THE CANADIAN PRESS/Jason Franson
EDMONTON -

Cottage owners and farmers who say a proposed feedlot threatens the water quality of a popular lake are to gather this weekend to discuss how they can keep making their case to the regulatory body that will rule on the project.

"We've had a lot of interest, not just from the lake community, but also the farm community," said Jeannette Hall, who is organizing the meeting in Westerose, Alta., near Pigeon Lake, where a feedlot owner has applied to expand his operation by 4,000 head of cattle.

Pigeon Lake is unusual in that it's fed by run-off, not streams or rivers, and is drained by a single creek. That makes the lake highly vulnerable to algal blooms fed by nutrients washing into its waters.

The lake's roughly 5,000 inhabitants have spent millions upgrading wastewater systems to improve the lake's water quality. They fear the feedlot proposed by G&S Cattle Ltd. would undo that work.

The feedlot would be within a few kilometres of the shore on land that slopes down into it.

Pigeon Lake is already "supercharged" with nutrients from decades of residential growth as well as the region's natural geology, said Jay White, a consulting biologist who's studied the lake for years. Those nutrients don't go away, he said.

"Once it gets in your lake there's no place for it to go."

While White said there are ways to keep manure from contaminating lake water, he doesn't see enough of them in the proposal now before the Natural Resources Conservation Board.

"This application is treating this site like any other feedlot site in Alberta," he said. "We're not seeing anything over and above the guidelines."

Greg Thalen, owner of G&S Cattle, has declined interview requests on his plans.

Many have concerns about public consultation, said Opposition New Democrat environment critic Marlin Schmidt, who was door-knocking in Pigeon Lake this week.

"Everybody found out about the project indirectly," he said.

Notice was posted in a small rural weekly newspaper that few saw, with a public feedback period of less than a month.

More than 300 statements of concern were registered, including from three First Nations. The County of Wetaskiwin asked for an environmental impact assessment.

Environment Minister Jason Nixon has said the public consultation has been adequate.

But Schmidt said many he spoke with fear their concerns won't be taken seriously.

"People were not feeling hopeful that their statements of concern would be considered, (that) if the government wants this to go forward there's not much people can do to stop it."

Schmidt said his party wants to look at changing legislation governing industrial agriculture. He said public consultation could be both lengthened and include more people, with better standards for locating developments.

"People are really upset about this proposal," he said.

Hall said the meeting will share information on the environmental risks of the proposal and how the regulatory process works. She said the concerns aren't only from cottage owners.

"So many people feel this is an attack on farming. That's not what it is at all."

The community meeting is set for Saturday at 7 p.m. at the Lakedell Ag Centre in Westerose.

This report by The Canadian Press was first published May 20, 2022.

Several people have been shot, two suspects have been arrested and police are searching for a possible third suspect after an attempted bank robbery in Saanich, B.C.