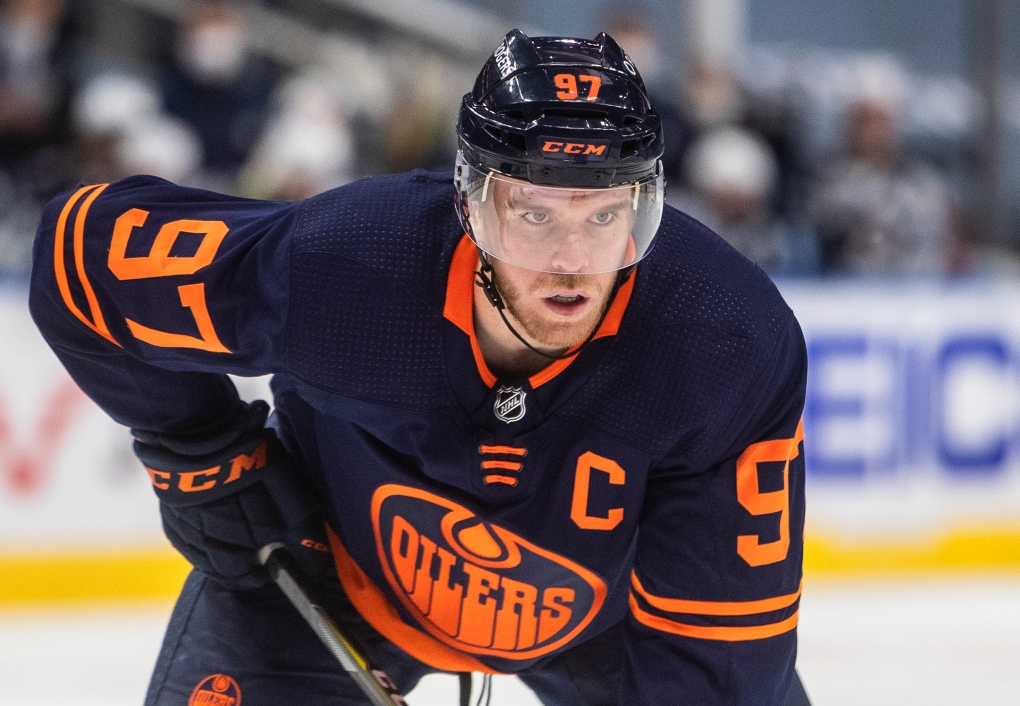 Edmonton Oilers' Connor McDavid (97) lines up for a face-off against the Winnipeg Jets during second period NHL action in Edmonton on Wednesday, February 17, 2021. THE CANADIAN PRESS/Jason Franson
EDMONTON -

The Edmonton Oilers have signed up a new supporting cast for Connor McDavid. The question is how far can they go in playoff prime time.

General manager Ken Holland worked the phones in the off-season to deliver depth to a corps of forwards that too often went into passenger mode last season when twin superstars McDavid and Leon Draisaitl were taking a breather.

In are Warren Foegele, Zach Hyman and Derek Ryan while Edmonton said goodbye to Jujhar Khaira, James Neal, Alex Chiasson, and others.

“You can put all the names on the paper you want, you still have to get out on the ice and do it,” said head coach Dave Tippett on Monday. “And you've got to do it each and every night.

Hyman is the big prize. The 29-year-old former Toronto Maple Leaf free signed a seven-year free agent deal and is slotted in on McDavid's left wing. He's a banger and a crasher with offensive upside. He had 15 goals and 18 assists with a plus-19 rating in 43 games last season.

On McDavid's right, big things are expected this year from Jesse Puljujarvi, who had 15 goals and 10 assists last season with a plus-6 rating.

McDavid is coming off an all-world season (33 goals and 105 points in the 56-game 2021) securing his third scoring title and second Hart Trophy.

Draisaitl didn't repeat his Art Ross season of 2019-20, but still scored 31 goals and had 84 points. He will anchor the second line between Ryan Nugent-Hopkins and Kailer Yamamoto. Nugent-Hopkins and Yamamoto need to bounce back from sub-par campaigns, with both struggling five on five.

The third line will likely be Foegele, Ryan and pugnacious veteran Zack Kassian.

The questions marks start at the blue-line and move in.

Darnell Nurse established himself last season as the No. 1 blue-liner, (16 goals, 36 points) while eating up a team leading 25-plus minutes a night.

He is paired with Barrie, the quarterback of Edmonton's lethal power play.

The hope is that greybeard Duncan Keith, who was traded to Edmonton from the Chicago Blackhawks in the off-season, can plug the gap on the second pairing and show there is still some high-level play left in him at 38.

Journeyman free agent Cody Ceci is expected to round out the top-four pairings.

Evan Bouchard may be ready to take on a full-time role this year. Veterans Kris Russell and Slater Koekkeok are also in the mix.

“The big thing is not overlooking this regular season,” said Russell as the pre-season wound down.

Goaltending remains the big concern and it's expected Holland will address it during the season or at the trade deadline as needed.

Mike Smith is back as the starter, hoping he can continue the glittering numbers from last season (21-6-2 record, 2.31 goals-against average and .923 save percentage).

At 39 years old, Smith won't be expected to carry the entire workload for the Oilers in net. Six-foot-seven backup Mikko Koskinen will be counted on as well.

Koskinen has been plagued by erratic play and a leaky glove hand in the past, but he brought his family over for support this season and aims to impress in final year of his contract.

“We're going to keep both of them going. One guy won't be out of the net for a long time,” said Tippett.

The big bonus for the Oilers is that a playoff spot is all but assured in the weak Pacific Division. Every opponent save the Vegas Golden Knights is less of an obstacle and more of a speed bump.

The Oilers were hit harder than most by COVID-19. Goaltender Alex Stalock developed inflammation of the heart muscle after contracting coronavirus and will likely miss the season. Keith was late to camp after overcoming vaccine hesitancy, getting the shot in the U.S., then quarantining. The lone vaccination holdout, winger Josh Archibald, is out indefinitely with heart inflammation, likely caused by contracting coronavirus in the summer.

Led by McDavid and Draisaitl, Edmonton's power play has finished first in percentage the last two campaigns (27.6 last season and a torrid 29.5 the year before that). They are also good when down a man. The penalty kill was ninth last season (82.5 per cent) and second overall the year prior (84.4 per cent).

The Oilers need to get off to a fast start and October is made to order: two winnable games against Vancouver, singles against Arizona, Calgary, Anaheim and Philadelphia, and an early statement game in the Nevada desert against Vegas, the projected division champion.

This report by The Canadian Press was first published Oct. 11, 2021.