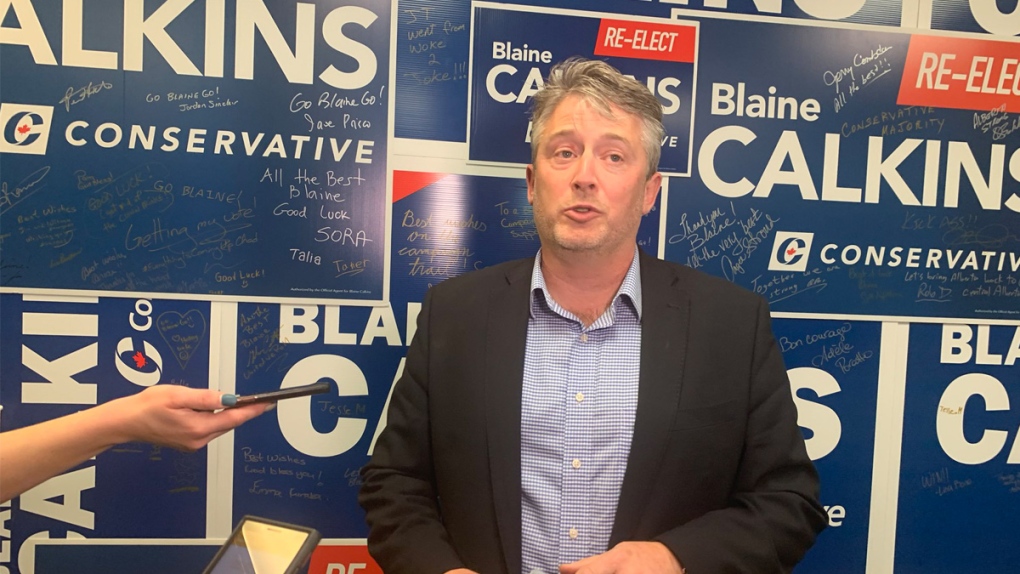 Incumbent Blaine Calkins won in Red Deer Lacombe with around 80 per cent of the votes. Oct. 21, 2019. (CTV News Edmonton)

"It's very rewarding. All of things we've done, all of the doors that we knocked on, the folks that we've talked to, it couldn't be better," said Red Deer Mountain View candidate Earl Dreeshen.

“I'm taking the small victories I can tonight on behalf of Alberta and that is Justin Trudeau will not be able to do anything in the House of Commons without somebody else's help or support, which means he is going to have to start listening to other parts of Canada," said Red Deer Lacombe candidate Blaine Calkins.

Both Dreeshen and Calkins were obviously upset with the Liberal party winning a minority government, but were happy with the gains made by the Conservatives.

“It's not the result that I think everybody in the room was looking for, but it's not the worst case scenario. Justin Trudeau no longer has the ability to do whatever he wants unilaterally in the country," said Calkins. "We're going to send down a very strong contingent once again from Alberta to stand up for what's important here, jobs, economic prosperity, growth and being treated as full and equal partners in this confederation."

“It's certainly disappointing because we know that we've had such a great message, which is probably why our popular vote is higher than theirs is," said Dreeshen.

The attention for the two now shifts to getting pipelines built. Dreeshen and Calkins expressed willingness to work with the Liberal government in order to get construction started on the Trans Mountain Pipeline.

Students in Red Deer Catholic and Public schools had the chance to have their say in the election as well by participating in a student vote. Kids from Grades 6 to 9 were able to cast a ballot for a candidate in their school's riding. Earl Dreeshen won in his riding with 54 per cent of the votes, while Blaine Calkins took home just over 57 per cent.

"Democracy only works if we use our voice and it only works if we participate, so the biggest thing is kind of teaching students that they have a say and their voice will be heard," said St. Thomas Aquinas teacher Dana Blair.