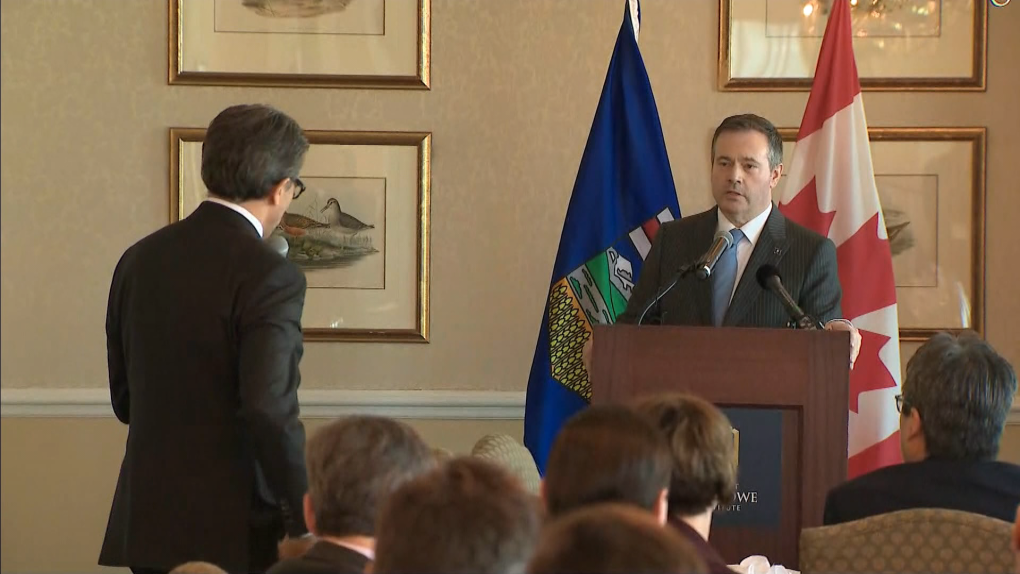 Alberta Premier Jason Kenney speaks at an even hosted by the C.D. Howe Institute on March 12, 2020.

EDMONTON -- Premier Jason Kenney believes Alberta is only beginning to feel the effects of a "perfect storm" of global events impacting the provincial and federal economies.

Kenney told guests hosted by the C.D. Howe Institute while in Ottawa on Thursday his United Conservative government is responding to a triple whammy hitting Alberta: COVID-19, free-falling energy prices, and five years of economic fragility.

While the province is preparing to help Albertans who are quarantined or isolated, Kenney also said it was putting protocols in place on oil sands projects with the hope of work not being disrupted there.

"The oil sands are not operated on the basis where the producers can simply flick a switch and turn off production because the consequences of that would be catastrophic. Potentially result in the loss of billions of dollars of capital investment," Kenney said.

"There are certain strategic assets in this country that need to continue to operate."

He added the details of an emergency economic aid plan would also be announced in future weeks.

"We hope and expect the government of Canada will be close partners with us I this. I received that assurance from [Deputy Prime Minister] Chrystia Freeland earlier today."

Kenney was in Ottawa for the First Ministers' Meeting, which was cancelled Thursday at news Prime Minister Justin Trudeau was in isolation. His wife, Sophie Gregoire Trudeau, is awaiting test results after returning from the U.K. with flu-like symptoms.

Trudeau and the ministers are expected to have their meetings over the phone.

Kenney said his message for Ottawa is "As goes Alberta, so goes Canada." He's looking for recognition and action from the federal government for Alberta's economic struggles equivalent to what the automotive industry saw in 2008, through which he says Alberta supported Canada.