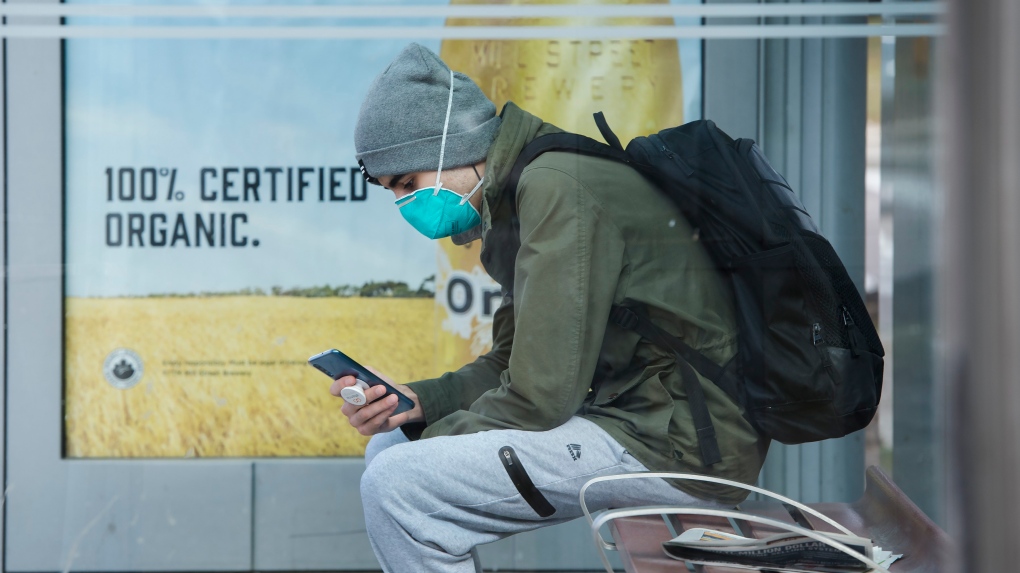 A man wears a mask while sitting in a bus shelter in Toronto on Friday, March 27, 2020. People are taking extra measures against the spread of the coronavirus also known as COVID-19. THE CANADIAN PRESS/Nathan Denette

EDMONTON -- Alberta reported 56 new cases of COVID-19 on Friday, the first time the province’s number of new cases has fallen from the day before since last weekend.

The province’s total number of cases now stands at 542. The number of new cases in Alberta also fell compared to the day before for the first time this week.

Non-emergency and non-critical health services offered by health workers or registered professionals like dentists, physiotherapists, massage therapists, podiatrists, chiropractors and optometrists will also be suspended. Those professions can still provide urgent and emergency care, however.

"The actions we are taking are tough but necessary to protect public health," Kenney said.

"The more that we comply with rules like these being recommended by our public health experts, the faster we can get through all of this and restart our economy."

Kenney also announced a number of new restrictions on landlords, including suspending civil enforcement of evictions for one month.

Here’s Friday’s data and infographics on how COVID-19 is growing and being spread in Alberta and Canada.

The Calgary zone continues to be the home to the majority of Alberta's cases as it has since the virus was first reported in the province on March 5​.

After the region saw its biggest jump in new cases yet on Thursday with 50, it saw a smaller increase of 37 on Friday. The area's total has nearly doubled since Sunday.

The Edmonton zone reported nine new cases on Friday, the fourth straight day the number of new cases has fallen from the day before.

After seeing its biggest bump of new cases on Tuesday, the central zone has seen smaller growth in new cases, with six more reported on Friday for a total of 43. Its cases have more than quadrupled since Sunday when there were just 10 cases.

The north zone reported four new cases for a total of 30. For the second time this week there are no new cases to report in the south zone, which remains on 12 total cases.

The Edmonton-West Jasper Place region continues to have the most cases in the Edmonton area with 17, according to the province's data map as of Friday afternoon.

HOW FAST IS COVID-19 GROWING IN ALBERTA?

Friday's jump of 56 new cases represents the first time this week the number of new cases has decreased from the before.

Until Friday, the province had recorded daily increases in the number of new cases for the past five consecutive days.

The Calgary zone continues to be a COVID-19 hotbed, with the region recording its four largest jumps in new cases over the past five days, with a high of 50 new cases recorded Thursday,

With nine new cases announced Friday, the Edmonton zone has seen its daily number of new cases fall from the day before for the last four days.

HOW IS COVID-19 SPREADING IN ALBERTA?

How is COVID-19 Spreading in Alberta?
Infogram

For the first time, cases caught through close contact with an infected individual or object outnumber the number of travel related cases.

There are now 42 suspected cases of community transmission in Alberta, more than double the total since Sunday,

Cases transmitted through community spread are closely monitored as an indicator of how well the spread of COVID-19 is being contained. Alberta has seen increase of one and two suspected community transmitted cases over the past two days, following jumps of seven and four in the two days prior.

The sum of community-transmitted, travel-related and close contact cases doesn't equal the number of total cases as health authorities undertake investigations of varying time lengths into the cause of each individual case.

HOW DOES COVID-19'S GROWTH IN ALBERTA COMPARE TO OTHER PROVINCES?

COVID-19: How Does Alberta Compare to National Trends?
Infogram

Elsewhere on Friday, Ontario announced 135 new cases of the coronavirus, bringing its total 993. The province also announced three deaths due to COVID-19, bringing the number of coronavirus-related deaths there to 18.

British Columbia announced 67 new cases as well as two new deaths on Friday. The province's total cases now stands at 792 and 16 people have died there due to the coronavirus.

Also on Friday, Manitoba announced the first COVID-19-related death in its province, which currently has 39 combined confirmed and presumptive cases, according to the latest data. And, Saskatchewan announced nine new cases, bringing its total to 104.

In Atlantic Canada, Nova Scotia and New Brunswick both announced their biggest daily increases in new cases of the coronavirus to date.

Nova Scotia reported 17 new cases on Friday, bringing the provincial total to 90. And, New Brunswick registered a dozen new cases, including one that's being investigated as possibly being spread through community transmission. Its total cases now sits at 45.  Newfoundland and Labrador also announced 20 new cases, bringing its provincial total to 102. Prince Edward Island announced two new cases, for a total of 11 province-wide.

Nunavut remains the only Canadian jurisdiction yet to report a case of COVID-19.

WHAT ARE THE OUTCOMES FOR ALBERTA'S COVID-19 CASES?

Alberta first reported a hospitalization due to COVID-19 on March 13. Since then, that number has steadily risen with noticeable increases of five patients on March 20 and then seven patients March 22.

There are 23 patients in Alberta hospitals due to COVID-19 as of Friday, including 10 in intensive care.

Health officials have said they're working to streamline the process to declare a person recovered while also noting the need to prioritize testing resources.

As of Friday, Alberta health workers had administered more than 38,000 tests across the province, an increase of 1,152 tests from the day before.