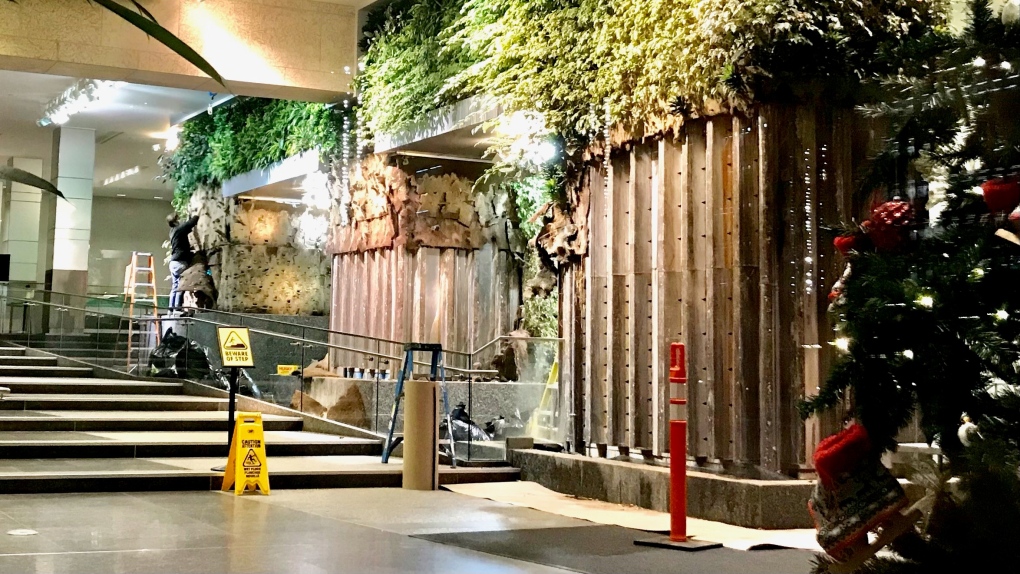 EDMONTON -- A provincial plant wall that a UCP MLA recently called “beautiful” but one that the province “can’t afford” was torn down in Alberta’s Federal Building Monday night.

The UCP says it is removing the living wall in an effort to save $70,000 a year in maintenance costs. The removal, originally planned for 2021, was fast-tracked after a bug infestation was discovered.

From outside the closed building, workers could be seen removing the plants and batting below them and stuffing the material into black garbage bags, exposing a bare wall below.

“I love the living wall. It’s beautiful. BUT these are the extras that we can’t afford...you can’t have fine wine taste on a beer budget,” UCP MLA Michaela Glasgo tweeted last week.

The living wall will be replaced with art from the provincial collection, but the company that created and installed the plant feature called removing it a mistake.

According to Holder, the living wall acts as a subsystem for the building’s HVAC system.

NDP MLA Deron Bilous suggested that the UCP keep the wall and cancel the provincial “war room” to save money instead.

“Cancelling the war room's funding would pay for the living wall with $29,930,000 left over for programs for seniors and vulnerable Albertans,” Bilous tweeted.

“Alberta's facing the greatest fiscal challenge in a generation, and Notley's NDP wants the government to spend $70,000 per year on plants in THEIR office building's lobby,” the UCP Caucus Twitter account said.

The living wall was installed as part of a renovation that started in 2010 and was approved by the Progressive Conservative government at the time.

More than 600 provincial staffers and MLAs have offices in the building, the government’s website says.

It was not clear when the removal of the wall would be completed.