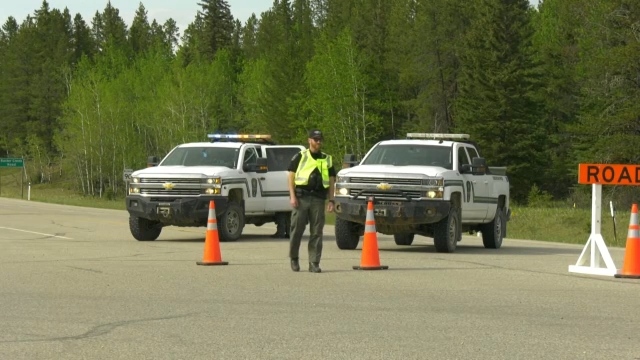 Alberta Fish and Wildlife officers block off access to Buster Creek Road near the Crimson Lake Provincial Park on Friday, May 3, 2022 due to a wildfire (CTV News/Nav Sangha).

Evacuation orders for the wildfire near Crimson Lake were cancelled Saturday morning after firefighters managed to hold the blaze overnight.

As of noon Saturday, the fire approximately 16 kilometres north of Rocky Mountain House was classified as being held by Alberta Wildfire and had burned approximately 15 hectares.

"Clearwater County has cancelled the Alberta Emergency Alert which means the Buster Creek Road Fire evacuation order has been lifted and road closures are no longer in effect," the county said in a statement.

Fire crews continue to work in the area.

Evacuations had begun around 3:45 p.m. on Friday, with residents and work sites north of the Ferrier Gas Plant affected.

The cause of the wildfire remains under investigation.