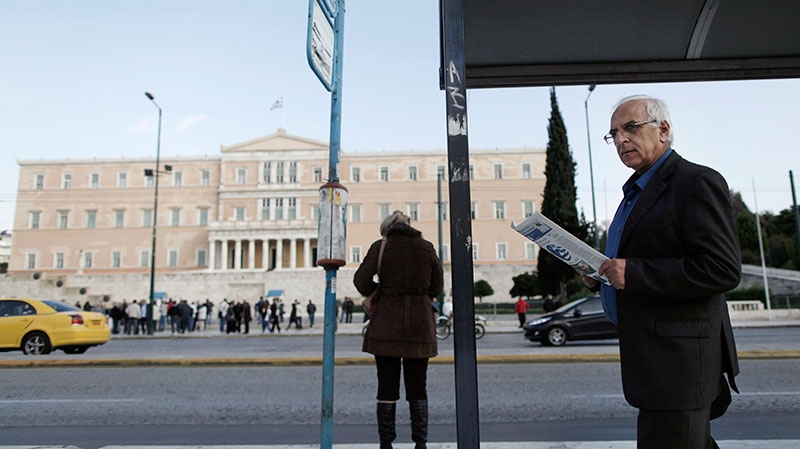 A man reads a newspaper as he walks past a bus stop opposite the Parliament in central Athens, Tuesday, Nov. 27, 2012. (AP / Petros Giannakouris)

ATHENS, Greece -- European and global financial leaders have agreed to release (EURO)44 billion ($57 billion) in critical loans to Greece and provide billions in additional debt relief in order to help the country stabilize its ailing economy.

After three weeks of negotiations, Greece's euro partners and the International Monetary Fund agreed early Tuesday morning to release the loans in four installments beginning next month. The leaders also settled on a raft of measures -- including a debt buyback program and an interest rate cut on loans -- that will reduce the country's debts by about (EURO)40 billion.

Greek Prime Minister Antonis Samaras hailed the agreement in Brussels as a victory. "Yesterday, a very grey, a very dark time for Greece ended definitively," he said in a televised address to the nation, adding that the agreement "managed to ensure us remaining in the euro."

But the country will still face years of economic pain as austerity measures agreed to as part of the bailout package are implemented.

Most stock markets in Europe were modestly higher on the news out of Brussels with the Stoxx 50 index of leading European shares closing up 0.2 percent. Meanwhile the euro gave up earlier gains to trade 0.4 per cent lower at $1.2941. The interest rate charged on Greece's benchmark 10-year bonds, an indicator of investor confidence in a country's finances, fell 0.2 percentage points to 14.47 per cent on the news of the debt deal.

"There remains the potential for this deal to fall apart in the medium term as there are a lot of moving parts and it is a long way away from the permanent fix that the IMF had been insisting upon," said Gary Jenkins, managing director of Swordfish Research.

"It is just one more big kick of the can down the road."

For three years, Greece has been struggling to convince markets as well as its creditors that it can get a grip on its public finances, which had spiraled out of control. The country is predicted to enter its sixth year of recession and is weighed down by an unemployment rate of 25 per cent.

The so-called troika of the European Central Bank, IMF and the European Commission has twice agreed to bail out Greece, pledging a total of (EURO)240 billion in rescue loans -- of which the country has received about (EURO)150 billion so far. In return for its bailout loans, Greece has had to impose several rounds of austerity measures and submit its economy to scrutiny.

Without the bailout money, the country would be facing bankruptcy and a possible forced exit from the 17-country eurozone. This would have potentially chaotic repercussions for the world economy.

Nonetheless, the spending cuts and reforms insisted on by the troika have been painful. Ordinary Greeks are struggling to make ends meet as wages have been cut and taxes increased. The country is routinely shut down as strike after strike is called in protest of yet more austerity. Meanwhile, extreme political views on both the left and right are enjoying increased popularity.

The eurogroup and IMF agreed to release in December (EURO)34.4 billion in loans originally scheduled for June. The remainder will be issued in three installments in the first quarter of 2013. The money will be used to help recapitalize Greece's struggling banking industry and pay back suppliers, including its pharmacists which have gone for months without any payment from the Greek state welfare system.

Greek Finance Minister Yannis Stournaras said the deal was "very important for it keeps Greece in the euro, offers it a significant opportunity to exit the vicious cycle of recession and over-indebtedness, and contributes to its debt reduction."

But Germany's finance minister, Wolfgang Schaeuble, warned that Greece still has to stick to its side of the bargain for the bailout loans and debt relief to work.

"We can do what we want, from the IMF to the eurogroup, if Greece itself doesn't implement the necessary, difficult reforms and adjustment measures step by step, then it's a mission impossible," he told reporters in Berlin.

The meeting in Brussels was the third time in the three weeks that eurozone finance ministers had tried to hammer out a deal on the next installment of bailout money for Greece.

The main aim of the bailout program is to right Greece's economy and get it to a point where it can independently raise money on the debt markets once the bailout loans start to run out at the end of 2014. It has been clear for months that the country is far from achieving that goal. Greece's debt levels are expected to hit 190 percent of its annual economic output next year- some (EURO)346 billion. The talks have centered on trying to get Greece back on the path to sustainability by reducing the country's debt load.

Current forecasts have Greece's debt level at 144 per cent of its output by 2020. The IMF had originally said it would only agree to the bailout program if the country's debt was at 120 per cent by then. A compromise between the IMF and the eurozone ministers was reached early Tuesday where Greece will now have to reach a 124 per cent debt load by 2020 and below 110 per cent by 2022. The difference between the current forecast and the new 2020 target would involve a cut in Greece's debt load of some (EURO)40 billion.

To reach this, the leaders agreed on a raft of measures. These include:

The deal still requires the authorization of a number of parliaments in Europe, including Germany's, where patience with repeated Greek rescues has been running low.

However, Rainer Bruederle, the caucus leader of the Free Democrats, the junior coalition partner, said he expects broad approval when changes to the program are voted on this week.

"Conditions have been put together which maintain a tough mechanism toward Greece, but still save us from a collapse of the Greek economy possibly having consequences that could pull down the whole of Europe," he said.