Danielle Smith to quit if Wildrose loses in 2016, blames media for message ills 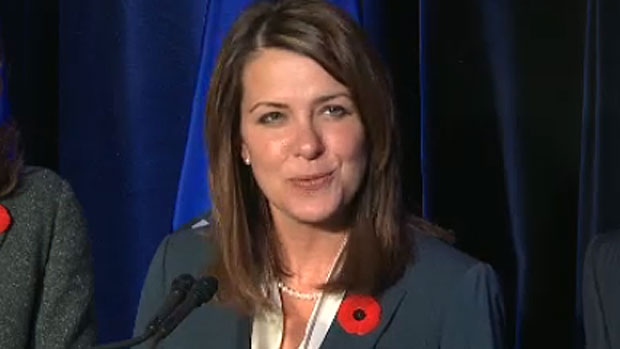 Wildrose leader Danielle Smith says her candidates ran neck and neck with the PCs right up to the end. Her party failed to gain seats in any of the byelections on Monday night, coming close in just one riding.

Wildrose Leader Danielle Smith threw down the gauntlet Friday, vowing to quit if she's not premier in 2016, and blaming the party's messaging ills on the media.

"My time as leader of the official opposition is coming to an end one way or the other in about 500 days," Smith told about 300 supporters at the party's annual general meeting.

"If we win the election in 2016, I will be the premier and we will be the ones facing a new leader of the opposition on the other side.

"And if we don't win the election in 2016, it will up to you as Wildrose members to choose a new leader. Either way we're in for a big change."

Smith made the remarks in her keynote speech for the meeting, which comes on the heels of four disheartening byelection losses to Premier Jim Prentice and the Tories on Oct. 27.

Critics inside the party have blamed as overly negative the byelection campaign strategy that tried to link Prentice to the entitlement and spending scandals of former premier Alison Redford.

Smith has acknowledged that going negative was the wrong strategy but said Friday that the media ignores their positive announcements and policy initiatives.

"At least two media outlets have told us directly that they won't cover our policy announcements because they're not news," said Smith in her speech.

She said only one reporter covered their seniors policy announcement during the byelections, and no one attended their news conference this week on infrastructure innovations.

"I didn't know there was that much media in Alberta," she said.

She also suggested the media slants the coverage it does give the Wildrose.

"Let's put aside any notion that the media are going to carry our message to the public over the next 500 days. They aren't."

Instead, said Smith, they will now focus on efforts to build a buzz for the Wildrose message one-on-one in communities and through blogs and social media.

She urged members to fire "obnoxious" riding board members.

She said she wants rank and file to hold more social events around political meetings: beer and wing nights, potlucks, cookie exchanges, singing Christmas carols door to door -- all organized by a Wildroser with the cheeky nickname of "Fun Police."

Smith said she is appealing for 1,000 Wildrosers to become party ambassadors to talk up the Wildrose at coffee parties and to community leaders like hockey coaches.

Smith is also calling on 100 "Wildrose Voices" to blog on issues, talk about their community and the role Wildrose can play in it.

There will be a Wildrose Service Corps., she said, to help in the community by organizing toy drives for needy children, helping out at the local women's shelter, or shovelling a senior's driveway.

"We need to make politics fun once again," said Smith.

Smith has already made other changes since the byelections. She has overhauled her communication and political advisory team.

Wildrose MLA Joe Anglin quit the party more than a week ago ahead of a caucus vote to turf him.

Smith has said the caucus could not hold frank discussions for a year because there was concern Anglin was secretly taping the sessions.

Anglin has denied it and Smith says she has no proof.