EDMONTON -- The intersection of Stony Plain Road and 184 Street has partly reopened after being closed in all direction following a violent single-car collision that sheared away the bottom of a wooden power pole.

The crash happened around 2 p.m. and the intersection was closed about 30 minutes later, reopening shortly before 4 p.m.

Police are directing traffic in the area while power crews remain at the site.

Images from the scene show a grey, Honda CRV stopped on the island on the northeast part of the intersection with its airbags deployed.

The vehicle has signficant damage to its front driver side and appears to have hit a nearby powerpole with enough force to knock away its bottom section, leaving the top part dangling from the wires above.

The female driver was taken to hospital.

No power outages have been reported in the area. 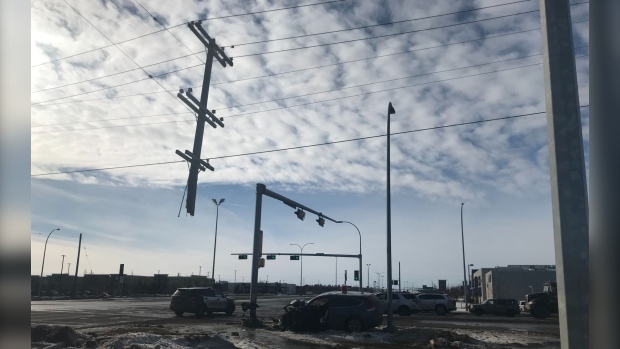