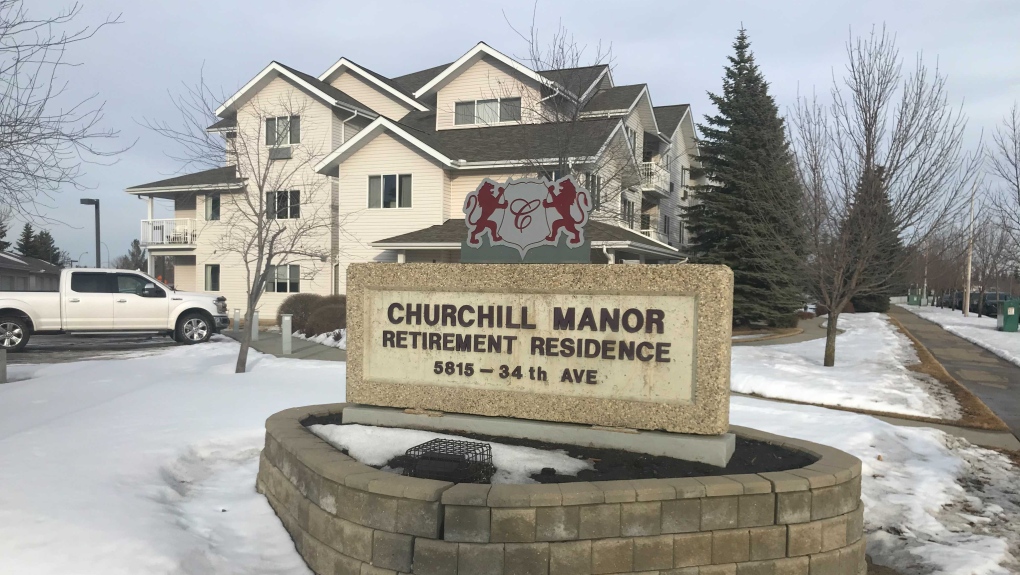 EDMONTON -- COVID-19 cases linked to an outbreak at an Edmonton retirement home number 36 in total – and all of them could have been avoided, one family says.

Four residents are being cared for "out of the community," according to management on Thursday. More than half of the cases have been confirmed the B.1.1.7 variant first identified in the United Kingdom, according to Alberta's top doctor.

One case is Rose Zinnick's 94-year-old father who has now spent most of a year – out of 2.5 at Churchill – alone in his room because of the pandemic.

While Zinnick said during a news conference with the Alberta NDP on Thursday he's not suffering from any symptoms yet, that remains a possibility.

Her dad tested positive the same day all the residents received their first dose of COVID-19 vaccine on March 1.

Given Churchill clients were due to be immunized soon, Zinnick thinks it was irresponsible of management to ease rules just weeks earlier.

"The government started loosening restrictions and for whatever reason, Churchill Manor decided to open the doors to visitors and to allow people into the main dining room," she told media.

"My dad said there was four people sitting to a table… Obviously somebody brought in the COVID."

In a statement to CTV News, Atria Retirement President Kristy Grange said: "After months of relative success with keeping COVID-19 out of our community, we began to slowly de-escalate protocols on February 12 while still requiring face masks and regular screening. This included offering dining with a limited number of residents seated at a socially distant table with the same individuals for meals. Our protocols have always remained consistent with the guidelines from Alberta Health Services."

The number of cases is higher than what was reported by Alberta's top doctor at a pandemic briefing Wednesday afternoon. Alberta Health Services finished rapid testing all workers and clients that day and was expected to return later in the week for another round of testing.

"Residents who have tested positive remain in their apartments, where they are in isolation and receiving care from Alberta Health Services nurses who wear full PPE," Grange added.

"We continue to keep all our residents, their families, and our employees informed and to have daily calls with Alberta Health Services. AHS has reviewed our safety measures and has said they are satisfied with our protocols."

But to Zinnick, it is "infuriating" that her father tested positive days after guests were welcomed back at the site.

"At this point, it really doesn't matter. It's in the building and they went from one case to almost 33 cases in a matter of four days. That is frightening," she told media.

While speaking about Churchill on Wednesday, Chief Medical Officer of Health Dr. Deena Hinshaw said AHS implemented new protocols at the home before it reached outbreak magnitude. Staff are not allowed to work at any other workplace for the duration of the outbreak. Anyone who enters the facility is required to wear a mask and eye protection.

On Thursday, she said the outbreak is a good reminder that COVID-19 remains a threat amid vaccinations, "and that it's not just incumbent on operators of facilities like this but on all of us to make sure that we are making decisions in everyday life that aren't just about our own health."

The Alberta NDP said Zinnick's concerns were not unique, and another family who wanted to remain anonymous were concerned hygiene problems were even worse at Churchill.

Labour Critic Christina Gray shared photos the family says they took of their loved one's suite on Friday, reportedly three days after the room should have last been cleaned.

In the pictures, mouse droppings and shavings scatter the floor.

"The resident, due to their current state of mind, wasn't really aware of the state of their apartment. And that's a real gap because families weren't able to be there to check and it appears that housekeeping in the facility was not maintaining appropriate standards," Gray said, suggesting the province needs to have stronger oversight of care homes.

The Atria president the facility "recently learned of an isolated incident of mice and immediately contacted a vendor to address it."