EDMONTON -- The last two weeks have been a rollercoaster of emotions for Angela Schuurman, her husband Steven and their two-year-old daughter Brenna.

Back in September, the Edmonton woman learned she was pregnant with her second child – a girl.

Then in February, 24 weeks into her pregnancy, Schuurman received some devastating news.

"I started doing my normal obstetrics appointments and that's actually where I mentioned that I was having a bit of weird pain to my doctor," she said.

That pain was in her right breast; she'd been feeling it for months.

After receiving a mammogram and biopsy Schuurman got the news.

Doctors told her that her diagnosis would normally mean starting chemotherapy treatments quite soon, but her pregnancy means there's another life to consider.

"At that time it was a little bit scary because there was thought that I might need to deliver the baby before I could start any treatment," Schuurman told CTV News Edmonton.

That original plan, Schuurman said, could have meant delivering as early as 24 weeks into her pregnancy.

"So we were looking at a really premature baby," she explained.

But a team of multi-disciplined doctors came up with a different plan for the unusual situation.

"It was decided that it's safest for both of us to do the surgery, wait a few weeks and then start chemotherapy," said Schuurman.

Within the next two months, she'll go under the knife twice.

The first surgery Monday, known as a mastectomy, will remove her entire right breast and lymph nodes on her right side.

Two months later she'll have a C-section and deliver her baby one month earlier than her original June 10 due date.

The baby will arrive in mid-May so mom can begin chemo within the required eight week window after her mastectomy.

"Now we're looking toward 35 weeks (pregnant) which is a big difference in the development of a baby, so that is something we're really grateful for," said Schuurman.

Doctors won't know how advanced Schuurman's cancer is until after the mastectomy, but believe right now it's reached at least Stage 2. 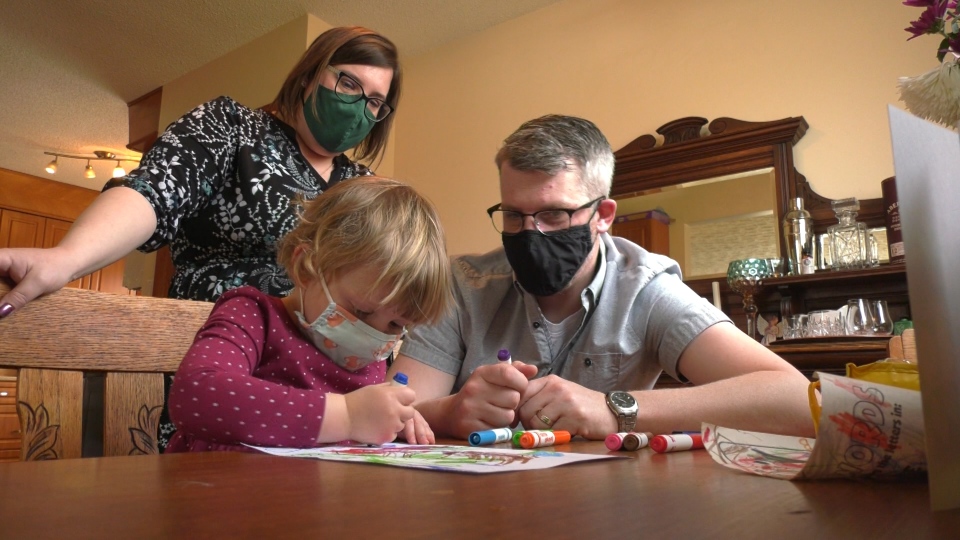 The next few months will be tough for Schuurman, but she's hopeful husband Steven and daughter Brenna will be able to give the newborn girl the attention and affection she needs when she arrives - while she gets her treatment.

"That's pretty tough," said Schuurman. "But I know that the best thing that I can do is just stay as positive and as confident as I can. That I can go through the treatment and do what the doctors say and hopefully come out better for it on the other end so I can be there for my girls."

An emotional set of circumstances for Schuurman and her family. One she hopes others can learn from.

"Just listen to your body," she said. "If something's wrong just ask and if it's nothing that's awesome. If it is (something) you can catch it early."

A GoFundMe page has been set up for the Schuurman family so people can give their support.