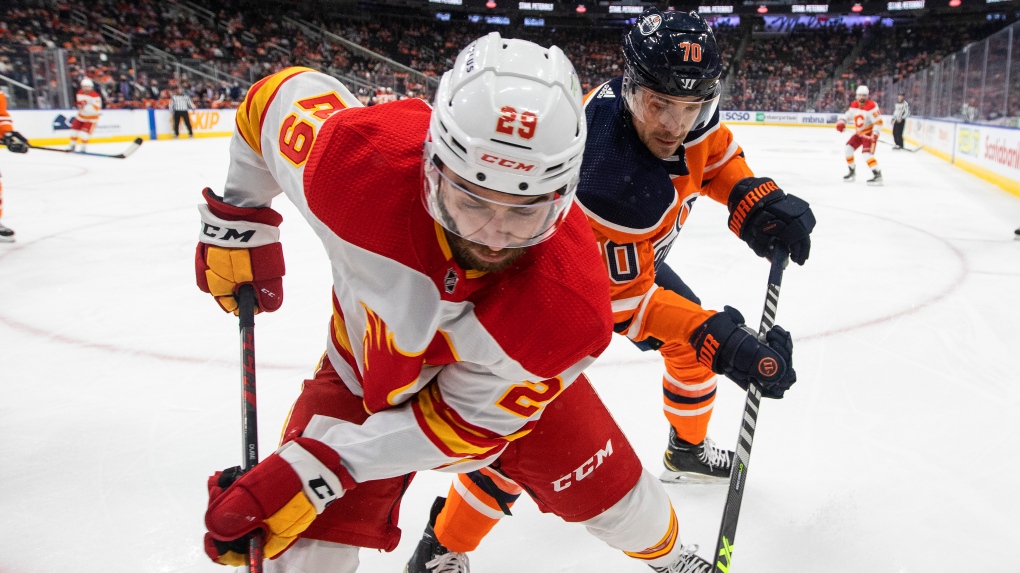 It had been more than a month since the Edmonton Oilers landed in the win column.

Leon Draisaitl had two goals and two assists and Evan Bouchard had two goals as the Oilers came from behind to snap a seven-game losing skid, rallying to defeat the Calgary Flames 5-3 on Saturday.

It was Edmonton's first win since defeating Seattle on Dec. 18.

“It feels great. Losing is awful, it sucks, it is not fun. It feels like there is always a cloud around you,” Draisiatl said. “We are not where we want to be yet, but this is a start and you have to start at some point. (Mikko Koskinen) was amazing. It was a full team effort, a good game for us.”

Koskinen was solid in the Edmonton net, making 44 saves.

Brendan Perlini also scored for the Oilers (19-16-2), who were in desperate need for a win, having gone 2-11-2 in their previous 15 games. Connor McDavid chipped in with two assists.

“Whenever you're losing games it's obviously a bad feeling,” McDavid said. “We're human. We have feelings. Those losses pile up and they weigh on you. It's human nature. It's nice to find a way to get a win. Hopefully we build a little momentum here.”

Matthew Tkachuk, Milan Lucic and Noah Hanifin replied for the Flames (18-12-6), who are 3-8-1 in their last 12 games. Hanifin added two assists.

“It's disappointing especially with the effort that we gave and how well we played. It's one of those things, they get life on the power play and they get themselves back in it and we deserved better than the result that we got.”

As has come to be expected, Edmonton allowed the game's first goal. It came 8:29 into the first period as Tkachuk lifted a rebound over Koskinen's leg to tie for the team lead with his 18th goal of the season. It was the 15th time in the last 16 contests - and the 24th in the last 28 games - that the Oilers have allowed the first goal.

The Flames made it 2-0 with a power-play goal scored with just 41 seconds remaining in the opening frame as Lucic was able to tip a Hanifin shot through the Oiler goalie's legs.

Edmonton got on the board 5:35 into the second period as a Bouchard blast from the point on the power play beat Markstrom. McDavid earned an assist to avoid going pointless for four games in a row for the first time in his career.

Bouchard picked the top corner for his second power-play goal of the game midway through the middle period to knot the game 2-2.

The Oilers surged in front with 1:42 left in the second as Perlini beat Markstrom with a long wrist shot, however the Flames erased that lead less than a minute later on an even longer shot from Hanifin.

Edmonton went up 4-3 with 5:31 left in the third period as Draisaitl showed tremendous patience in waiting for Markstrom to go down before sending home his 27th goal of the season.

Draisaitl added an empty netter with one second to play.

The Flames are back at it on Monday as they host the St. Louis Blues, while the Oilers are off until Tuesday when they travel to Vancouver to face the Canucks.

This report by The Canadian Press was first published Jan. 22, 2022.

Ont. and Que. scramble to recover from thunderstorm that left at least 8 dead

The storm that moved across Ontario and Quebec Saturday is known as a 'derecho', a powerful kind of windstorm that is long lasting and far-reaching.

A new study that brought sniffer dogs to an airport to search for COVID-19 has found that dogs may be able to detect the virus with high accuracy just from smelling skin swabs.

A Ukrainian court sentenced a 21-year-old Russian soldier to life in prison Monday for killing a civilian, sealing the first conviction for war crimes since Moscow's invasion three months ago.

More than 1,000 lawyers in Ontario have signed a petition to make all court appearances 'presumptively virtual unless parties and their counsel agree otherwise.'

Guests at an Indigenous-owned resort in B.C.'s Interior were evacuated Sunday morning and watched as firefighters tried to contain the flames that had engulfed the building's roof.