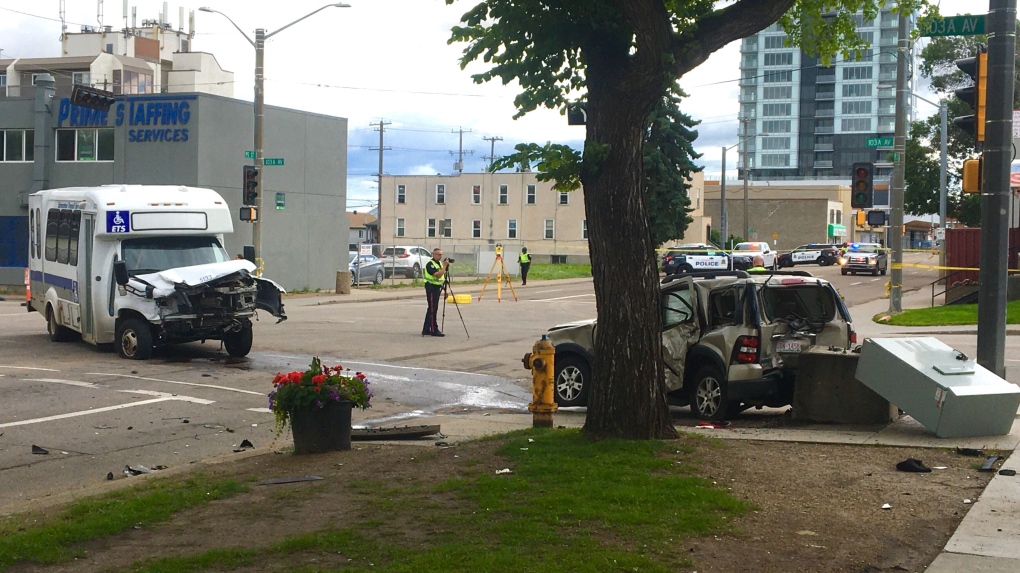 A pedestrian is dead following a crash involving an ETS DATS bus and an SUV in the area of 95 Street and 103A Avenue on Wednesday, July 15, 2020. (John Hanson/CTV News Edmonton)

EDMONTON -- An SUV drove through a downtown Edmonton red light, crashed against an ETS bus for disabled adults and then hit and killed a pedestrian on a sidewalk Wednesday morning, police said.

Officers responded to the collision at the intersection of 103A Avenue and 95 Street at approximately 10:40 a.m. and found the 24-year-old pedestrian dead near the sidewalk, EPS said.

Investigators were told a Ford Explorer travelling west on 103A Avenue drove through a red light and crashed with an ETS DATS bus travelling north on 95 Street before it hit an electrical box and the pedestrian.

Both drivers were taken to hospital with serious but non-life threatening injuries, police said.

There were no passengers on the bus at the time of the crash. The passenger of the Explorer, a man believed to be in his 30s, fled on foot and was last seen running near 97 Street and 106A Avenue, police said.

Charges are pending against the driver of the Explorer, a 30-year-old woman.