Drone deliveries set to take off from Edmonton International Airport

Drone deliveries set to take off from Edmonton International Airport

A new type of aircraft will soon be taking off from the Edmonton International Airport (EIA).

Initially, the unmanned drones will be pre-programmed to fly cargo from the EIA to a landing spot in Nisku, Alta.

The flights will be monitored remotely by DDC from its operations control centre in Vaughan, Ont.

"There's a couple in contention," he said from his office in Toronto. "Once they decide which one it's going to be we'll have a DroneSpot depot there, and the drone is programmed to fly back and forth between those depots."

Zahra pointed out that while the drones' route will be from one takeoff point to one landing spot at first, the operation has the potential to be scaled up, down the road.

The new route will initially be flown by the smallest of DDC's three delivery drone types, known as the Sparrow. 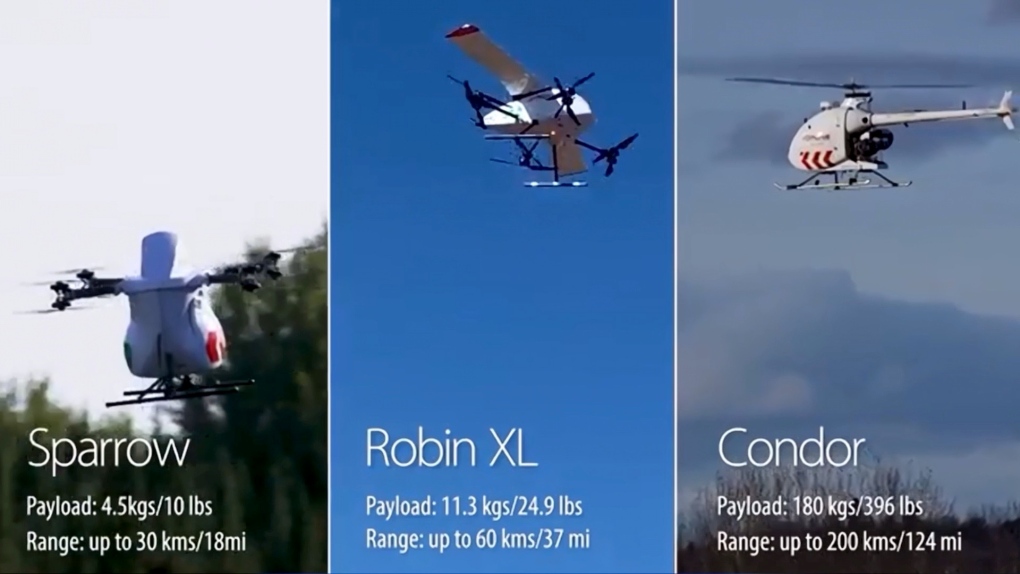 The battery-powered Sparrow has a range of up to 30 kilometres and can carry up to 4.5 kilograms.

DDC's battery-powered Robin drone has a 60 kilometre range and a 11.3 kilogram payload.

Zahra said DDC's largest courier drone, known as the Condor, is almost as big as a small helicopter. The gasoline-powered drone can carry up to 180 kilograms of cargo and can fly roughly 200 kilometres per flight.

According to Zahra, his company is operating under what current regulations in Canada allow for right now, with business to business and rural remote flights making up the bulk of its operations, but he expects a broader use for the technology in the future.

"You will see a greater penetration of drone delivery into suburban and urban markets," he said, "and definitely one can envision seeing home deliveries."

Zahra expects the two courier companies will use the drones to move a wide variety of cargo.

'WE'RE PROVIDING A BUSINESS SERVICE FOR OUR REGION'

"When we really think about the future and how much cargo is taken from the airport to off-site, you can see that there's such a significant demand for the kind of efficiency drones can provide.

"What this does is provide very quick access from the airport to that final delivery point."

Bednard said the EIA will work alongside DDC to ensure all regulatory measures are in order.

"If we can provide the support to build the infrastructure for companies like DDC to then provide that last mile to the business site," she said, "then we're providing a business service for our region."

"Those (large) aircraft flights are so highly regulated," she said. "By applying that same kind of discipline into drones, you can see that it's a very safe and effective methodology."

The EIA spokesperson said she believes this will be the first drone delivery operation of its kind at a large-scale international airport in Canada.

Implementation of the drone delivery infrastructure has already begun. The operation is expected to launch in September.