Dry conditions prompt over 40 fire bans or advisories in Alberta 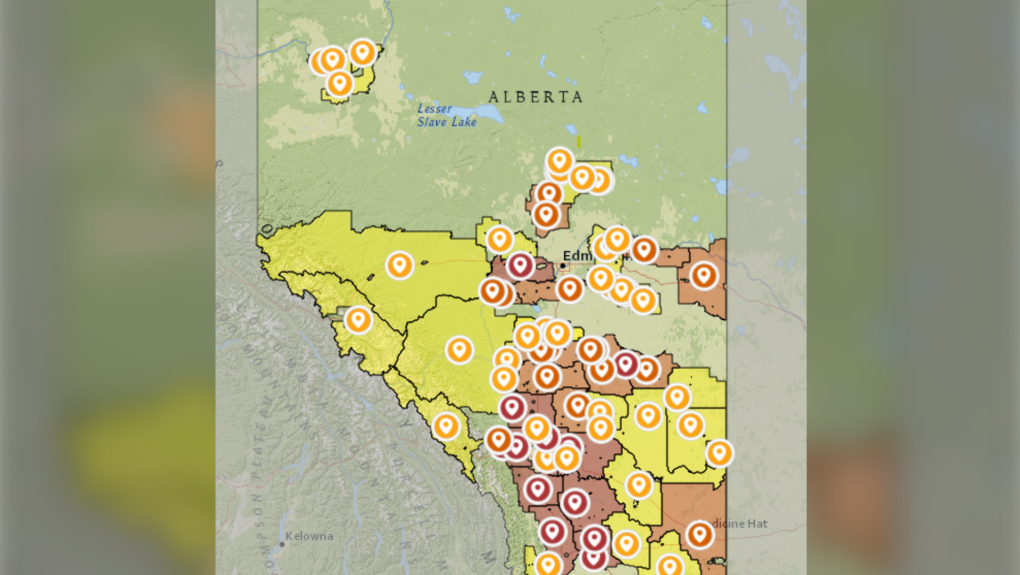 As of April 15, 2021 there are 46 fire use warnings, restrictions, or bans in Alberta (Supplied/Alberta Fire Bans).

Officials in Lac Ste. Anne County say the fire advisory was declared due to a “very high fire hazard.”

Cooking or warming fires are allowed in Lac Ste. Anne County, however, residents are encouraged by fire officials to exercise caution.

Under a fire ban, no outdoor fires are permitted in Parkland County including fire pits, burn barrels, recreation fire pits, and charcoal briquette barbecues. Only gas and propane appliances like stoves and fire pits are allowed.

As of publication, there are 46 fire warnings in the province – ranging from full fire bans to advisories.

Jasper and Banff National Parks both have fire advisories in place limiting campfires to designated fire pits or boxes and campers must purchase fire permits prior to using fire pits at road-accessible campgrounds.

Other fire bans in the province include Mountain View County, Wheatland County, Rocky View County, the town of Cochrane, Vulcan County, Lethbridge County, and the city of Lethbridge.

Red Deer, the County of Stettler, Kneehill County, Cypress County, and the County of Vermilion River are some areas with fire restrictions.

On April 1, a grass fire ignited an area west of Cochrane and March 28 saw a large grass fire near the southern Alberta village of Carmangay damage over 5,000 hectares of land.

For a complete list of fire bans, restrictions, and advisories visit albertafirebans.ca.

Officials ask Albertans to report any visible smoke or wildfires to 911.