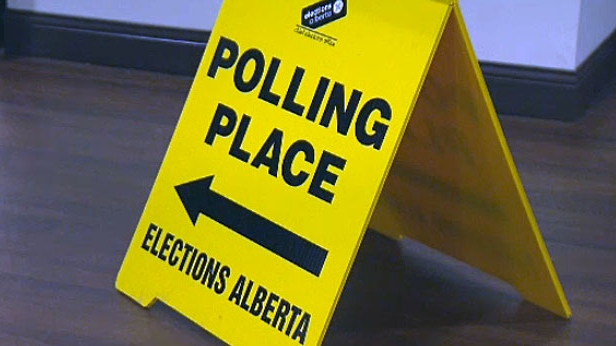 A file photo of an Elections Alberta sign. (CTV Calgary)

Voters in northeastern Alberta started casting ballots Tuesday to select a new MLA, with eight names to choose from.

Advanced polls opened at 9 a.m. in both Fort McMurray and Lac La Biche, with six smaller communities to get early polling stations throughout the week.

The byelection was made necessary when UCP MLA Laila Goodridge resigned last August to run in the federal election.

Four of the candidates – representing the top polling parties in Alberta – took part in a forum hosted by McMurray Metis on Feb. 26.

"I love my town, I love my community…so please vote for me on March 15," a tearful Brian Jean said.

A former leader of the Wildrose Party, Jean has served as both an MLA and an MP for the area. His goal, if elected, is to replace Premier Jason Kenney.

"I'm running to fight to make the lives of the people in this region better," said NDP candidate Ariana Mancini.

The NDP finished second in the riding in both the 2015 and 2019 Alberta elections, to the Wildrose Party and the United Conservative Party respectively.

"I was supposed to be retired from politics….however troubled times are here," Wildrose Independence Party candidate Paul Hinman said at the forum.

"This byelection is a gift being offered to us in this region. A chance to vote for something and someone, whose only reason for taking such a big risk is a chance to do better by our region," said Michelle Landsiedel, who is running for the Alberta Party.

An Angus Reid poll released in January predicted 42 per cent of Albertans would vote for the NDP compared to roughly 31 per cent for the UCP. The Wildrose Independence Party has 16 per cent support, followed by the Alberta Party at eight per cent.

That poll was a randomized sample of 3,375 Canadians. The Alberta margin of error was +/- 4 per cent.