EDMONTON -- A nearly six-month-long investigation by various law enforcement agencies in eastern Alberta have led to two arrests and kilograms worth of drugs seized.

Mounties say approximately $80,000 in cash believed to be proceeds of crime, over seven kilograms of suspected drugs, two kilograms worth of suspected buffering agents, and a number of prohibited firearms were seized through three coordinated search warrants.

According to police, the drugs seized amount to around 60,000 doses.

RCMP say a drug investigation from September 2020 where a Myrnam, Alta., resident was allegedly trafficking methamphetamine in the St. Paul and Bonnyville region lead them to other drug operations in eastern Alberta.

Police say coordinated searches were conducted on Tuesday in Myrnam, Alta., and Edmonton in relation to suspected drug trafficking.

The Alberta Law Enforcement Response Team (ALERT) and RCMP searched a home in Myrnam where approximately 750 kilograms of meth and a “large quantity” of Canadian cash were found. 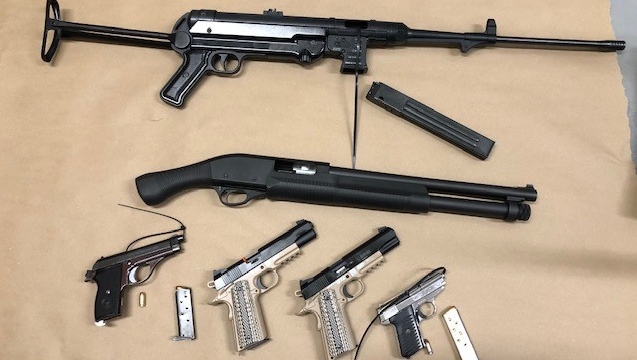 Some of the items seized by law enforcement. According to police, the drugs seized amount to around 60,000 doses (Supplied/RCMP).

On Monday, a different west Edmonton home was searched by police where one kilogram of meth and a “large quantity” of cash was seized.

Tierney was released on bail while Montandon remains in police custody until her scheduled court date next Tuesday.

“I’m confident this seizure will have a significant impact on drug trafficking operations in the Lakeland area, specifically in the communities of St. Paul and Saddle Lake,” RCMP Cor. Bobby Burgess said in a statement.