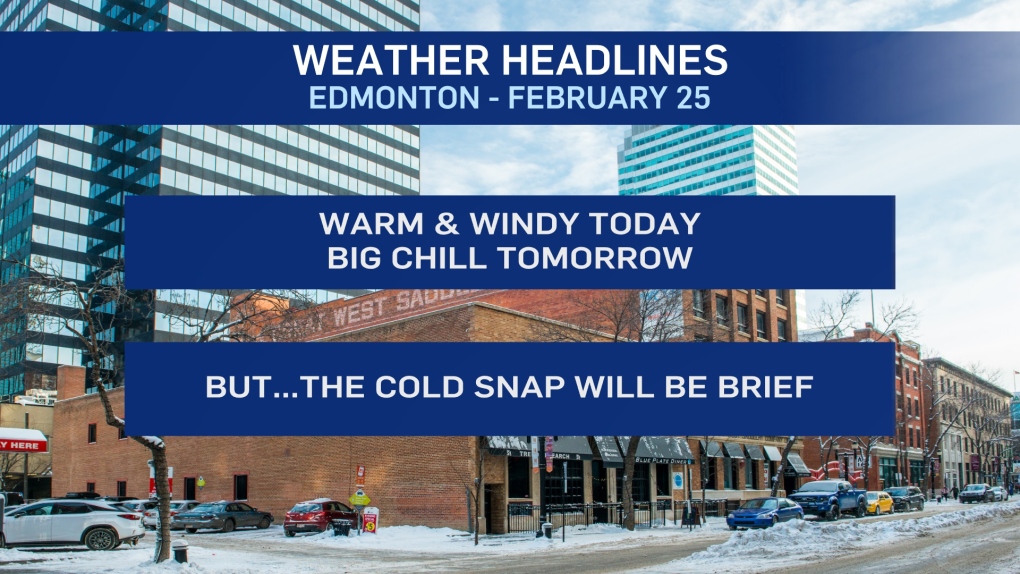 EDMONTON -- Get ready.  The warm spell is about to come to an abrupt (but brief) end.

Edmonton will drop about fifteen degrees between this afternoon's high and tomorrow's.

It won't be as cold as what we had early in February and it won't last more than a day or two in Edmonton.

But, it's getting cold again!

Today - we have heavy snow falling in the High Level region and wind gusts around 100 km/h in parts of the mountain parks and Nordegg region.

Edmonton and area might see a brief area of flurries move through early this morning.

Then, we'll get some sunny breaks midday.  Wind starts to pick up through the afternoon and the clouds roll back.

We have a cold front set to drop through the area tonight and that'll give some flurries and/or light snow to central and north-central AB.

Most areas (including Edmonton) won't see much accumulation (if anything).

The bigger issue with the passage of that cold front is that we'll go from a high near 5 degrees today to the -10 range Friday.

Saturday should be back to around -5 and by Sunday we're near (or slightly above) zero again.

Western AB won't see as much of a drop in temperature.

Eastern and NE AB will get temps in the -10 to -15 range for Fri/Sat and a slower return to mild weather.

Today - Cloudy with a few flurries possible early this morning.

Friday - Mostly cloudy.  60% chance of flurries or light snow in the morning.