Edmonton weather for July 29: Heat warnings back in effect 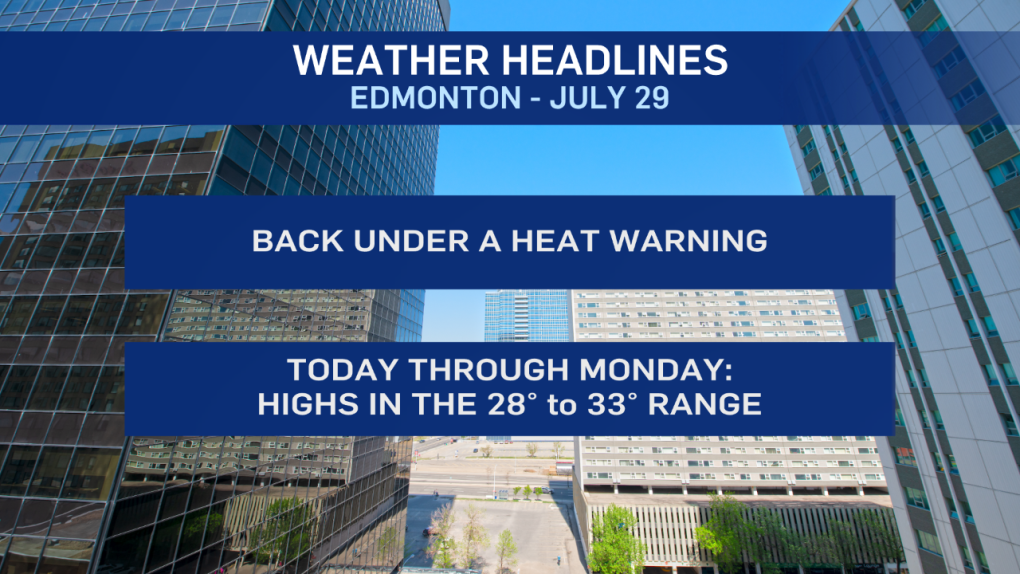 Daytime highs are forecast to hit 29 C or hotter for the next five days AND morning lows will be in the 15 to 19 degree range.

That's hot enough to qualify for the heat warning that was issued early this morning for Edmonton and area plus all of eastern Alberta from Cold Lake south to the border.

Red Deer and area are also included in the heat warning.

The hottest day for Edmonton will likely be Sunday. Temperatures should climb above 30 C Saturday afternoon. But, Sunday has the potential to be a 33 or 34 degree day.

This far out, I'm playing it conservative and "only" going with a high of 32 C in my forecast. But, it could be a degree or two hotter.

Monday will also likely hit 30 C (maybe a degree or two above).

Saturday has the best chance to break a record. The July 31st record high is 31.1 C in 1922. That number is in serious jeopardy.

All of this depends on the smoke continuing to stay out of the Edmonton region.

So...will we see that push any further east?

We continue to get differing outcomes from the ECCC smoke model and the FireSmoke.ca model.

Neither model pushes THICK smoke over the Edmonton region today or Friday.

The AQHI may sneak up to a "moderate risk" level (as it did last night) and then return to low risk shortly after.

The wind direction from ground level to 120m up is forecast to be predominantly out of the east Saturday-Monday.

So...as long as the models are correct and no smoke pushes in Friday, we shouldn't have too much to worry about through the long weekend.

But...I've said it before and I'll repeat it again: the reliability of smoke forecasting beyond one or two days is pretty low.

We're just going to have to watch it play out day by day.

A few showers and thunderstorms are moving through parts of east-central and northeast Alberta this morning.

We'll likely see some thunderstorms pop up in the foothills this afternoon (risk of a few severe storms with large hail).

Those showers/storms will track ESE this evening and although Edmonton does have a risk of seeing one of those move through the area, that risk is fairly low.

Most of the action should remain in the foothills tonight.

Not much chance of precip through the long weekend.

Today - Some clouds this morning. Sunny this afternoon.

Tonight - A few clouds. 30% chance of a shower overnight or early Thursday morning.

Friday - Some clouds in the morning. Sunny in the afternoon.