Edmonton weather for June 22: Taking a run at 30 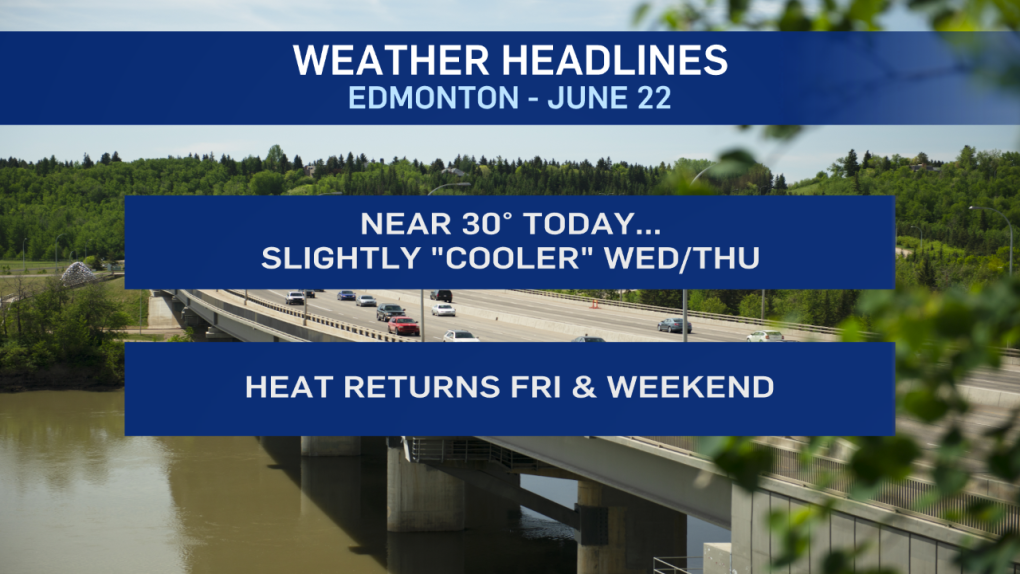 EDMONTON -- Another hot day in Edmonton and across much of Alberta.

Temperatures will be close to 30 this afternoon and it looks even hotter by Saturday-Monday.

That's several days off and things may change slightly between now and then.

But, if everything holds, we'll be in the low 30s for daytime highs this weekend and early next week.

The last time Edmonton hit 30 C was back on August 18th.

We hit 30 twice last summer, both days came in August.

We've had a few 29.9 days in the past couple years. But, it's been a while since the month of June had a string of days like what we're heading into.

There IS a bit of a reprieve Wednesday/Thursday.

After hitting 28 C in Edmonton Monday and climbing close to 30 C today, we'll see highs in the 22 to 25 range Wednesday/Thursday.

That's still slightly above average. But, they're the two coolest days this week and possibly through the rest of this month.

There's a chance of some scattered showers and thunderstorms across northern Alberta today.

Areas from Edmonton south to Red Deer have a SLIGHT risk of seeing an isolated shower or thunderstorm.

But, the risk for any given area is so low, that I've left it out of the Edmonton forecast for today.

I AM keeping the slight risk of a morning shower IN the Thursday forecast. Although, that's not looking very likely at this point.

Thursday - 30% chance of a shower in the morning, then Mainly sunny.