Edmonton weather for March 1: Warmth returns for the start of March 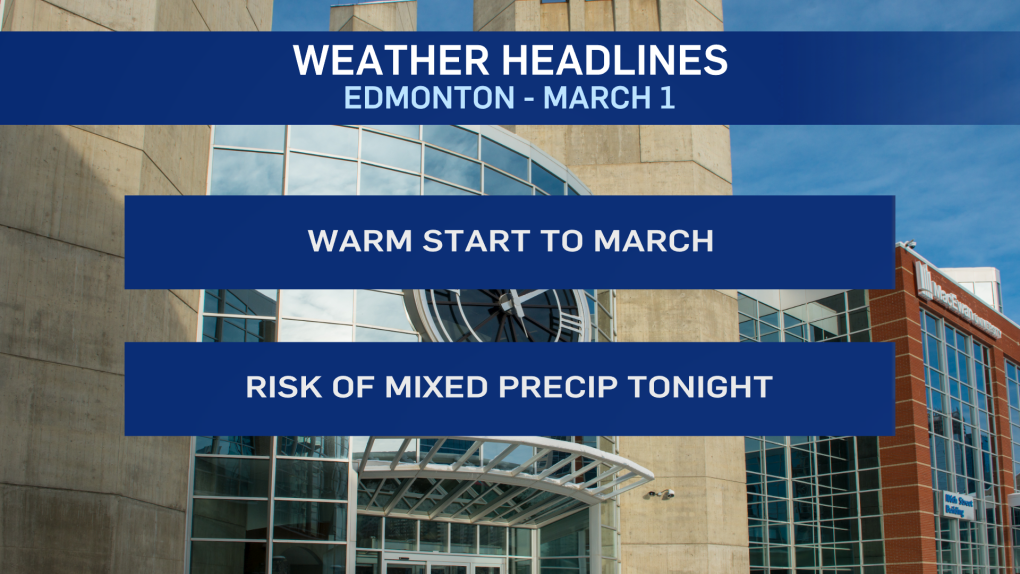 EDMONTON -- After a pair of sub-zero daytime highs to close February, warm air is set to return in a big way.

Edmonton hit highs of -6 and -4 this past weekend. But, we'll climb well above zero this afternoon.

A low-pressure system set to move ESE across northern Alberta will help to pull some heat into the southern half of the province.

Edmonton and area should be 5 to 8 degrees above zero this afternoon.

Even northern spots like Grande Prairie/Athabasca/Cold Lake will be 3 to 6 degrees above freezing.

High Level and Fort McMurray will stay into some cooler air with highs below zero.

Those regions (High Level and Fort McMurray) will also get some heavier snow starting later today and carrying into this evening.

Five to 10 centimetres is possible in those areas. Peace River will likely get a few centimetres, too.

South of that, it gets tough to predict snowfall totals because it will be mixed precipitation.

Areas from Grande Prairie/Slave Lake south into the Edmonton region have a chance of rain/snow mix or showers, or just wet snow.

The timing for Edmonton and area could be problematic.

IF that mixed precipitation comes through in the evening, we're still above zero.

IF it holds off until later tonight, it could be patchy freezing rain or rain/snow mix that's freezing on contact.

Either way, icy roads will likely be an issue for the Tuesday morning commute.

The question only seems to be: "Will there also be a problem tonight?"

Any slick streets will turn slushy/wet again Tuesday afternoon as it warms up.

In fact, daytime highs right through the first week of March should be well above zero and somewhere in the 4 to 8 degree range in Edmonton.

Tonight - Mostly cloudy. 30% chance of rain/snow mix of a shower.