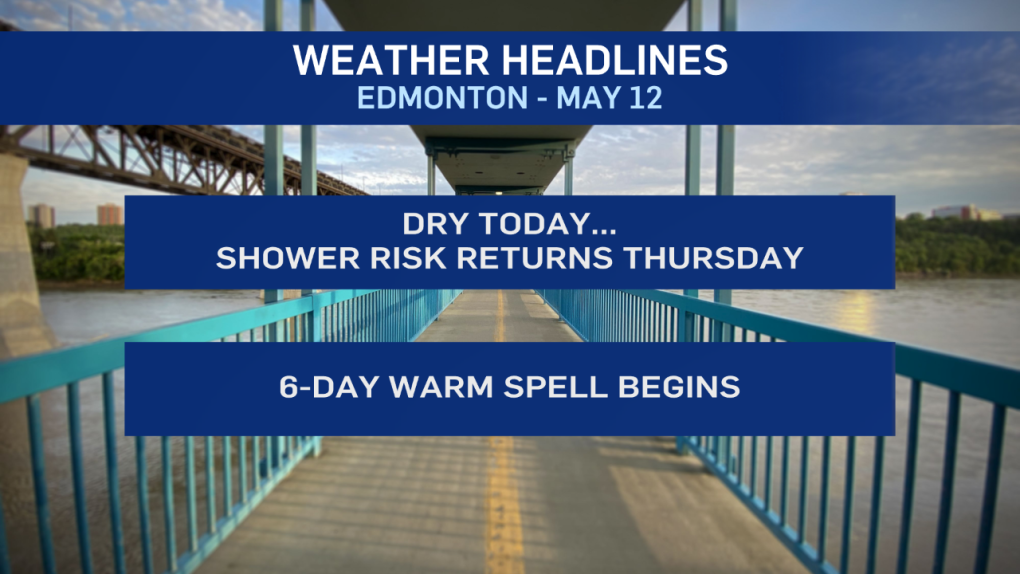 EDMONTON -- Temperatures have been in the mid-teens in Edmonton for the past few days.

So far, we've only had three days in the 20s this year (two of them came in April).

But, that number will likely change over the next six days.

We may not hit 20 C each of the next six days. But, I'll be surprised if we don't get at least three or four 20s and on days we come up short, it'll only be by a degree or two.

The only thing that could prevent us from getting above the mid-teens would be a mid-afternoon shower or thunderstorm like we had yesterday.

I don't think we'll see a repeat performance today. Morning sun will give way to some afternoon clouds in the Edmonton area today.

Smoke from the wildfire near Tomahawk is causing poor air quality in areas west of the city and an alert is in effect (as of this morning).

Scattered showers and/or thunderstorms are possible in parts of north and western Alberta today.

Edmonton gets a shot at some afternoon/early evening showers and thunderstorms Thursday.

Friday also has a slight risk.

More sun than cloud is in the forecast for the weekend and Monday though. AND the warmest part of the next six days looks like it's coming Sunday or Monday.

Today - Sunny this morning. Mix of sun & cloud this afternoon.

Thursday - Mix of sun & cloud. 40% chance of an afternoon shower or thunderstorm.