Edmonton weather for May 13: Warm and sunny, slight shower risk 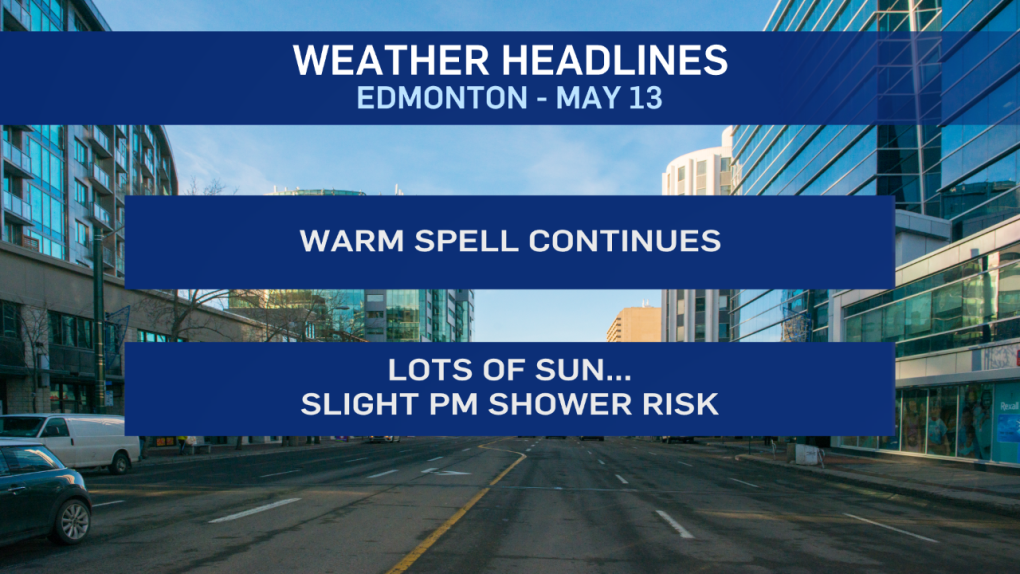 EDMONTON -- More sun than cloud and another warm day for the Edmonton area.

Temperatures hit a high of 19.8 C on Wednesday and I have a high of 20 C in the forecast for today.

The only caveat to that high is that IF we get a shower or thunderstorm moving through the area this afternoon, it may cap temperatures a bit lower.

A few showers and thunderstorms will likely pop up in spots around central and north-central Alberta this afternoon.

However, while there's a high likelihood of spotty precipitation SOMEWHERE within that large area, the risk for any given spot is low.

Temperatures will continue to top out around or in the 20s Friday through Monday.

Friday features a slight risk of an evening shower or thunderstorm in the Edmonton region.

Sunday's now shaping up to be the warmest day in the period with a high near 25.

Beyond that, there's some uncertainty for the early to middle part of next week.

Monday and Tuesday are still likely warm, but there's a precipitation risk for Wednesday and Thursday and some much cooler temperatures.

The GEM and (to a lesser extent) GFS are hinting at a snow risk Thursday. BUT... I think it's WAAAAAY too early to get excited/concerned about that.

I'm just mentioning it here because there are a few folks on social media talking about it and thought I should at least weigh in.

Scattered pop-up showers and thunderstorms are likely across central and northern Alberta this afternoon/evening and again late in the day Friday.

No heavy, steady rain is anticipated.

Warm (average to slightly above average) temperatures will prevail across the entire province today and Friday.

The weekend will bring some cooler air into northern Alberta. We also have a chance for some steadier rain (rather than showers) for the High Level and Fort McMurray areas Saturday.

Today - Partly cloudy. 30% of a shower or thunderstorm this afternoon.