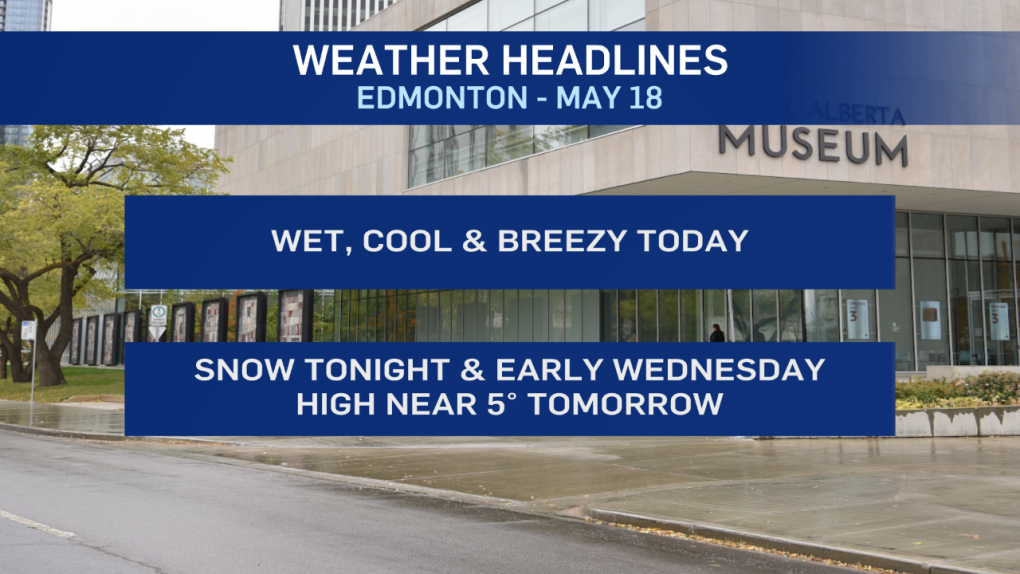 EDMONTON -- After five straight days in the 20s, get ready for a major change to the weather pattern.

Wet, cool, windy AND some snow.

BUUUUUTTT...we'll get through all that and be out the other side by the weekend.

Cloudy with off/on showers and periods of rain in the Edmonton area this morning.

I don't think it's going to rain non-stop today. But, most of the region will get at least SOME rain this morning.

Most of the precipitation will likely be north of the Edmonton area this afternoon in a region from Hinton/Grande Prairie northeast towards Fort McMurray/Bonnyville.

However, we may see a few thunderstorm fire up along the foothills late this morning and there's a chance one of those pushes torwards the Edmonton/Red Deer regions this afternoon.

As colder air gets sucked in from the north, the rain in northern Alberta starts to flip over to snow late this afternoon.

I don't think northwestern Alberta is going to get hit as hard as the northeast.

But, areas from Athabasca to Bonnyville and north to Fort McMurray could pick up several centimetres of accumulation (maybe 5-10 cm) by midday Wednesday.

Parts of east-central Alberta could also get some decent accumulation (ie: 5 cm or more).

In areas around Edmonton and south towards Red Deer, there's a chance of seeing a bit of accumulation (especially on grassy areas).

But, I'll be surprised if we get more than 1 to 3 cm of accumulation and it's possible it just ALL melts on contact.

The snow's out of the Edmonton area by late Wednesday morning.

Temperatures will top out in the 10 to 15 degree range today, we'll be closer to 5 C for a high Wednesday, then back to around 10 C Thursday.

Warmer air moves back in for the long weekend with highs in the mid to upper teens Friday and Saturday, and near 20 C by Sunday or Monday.

Today - Mostly cloudy with occasional showers, risk of a thunderstorm in the area this afternoon.

Tonight - Cloudy with a 70% chance of showers flipping over to snow. Windy.

Wednesday - Wet snow in the morning, ending by midday. Cloudy with sunny breaks in the afternoon.