Edmonton weather for Nov. 24: A warming trend AND some rain 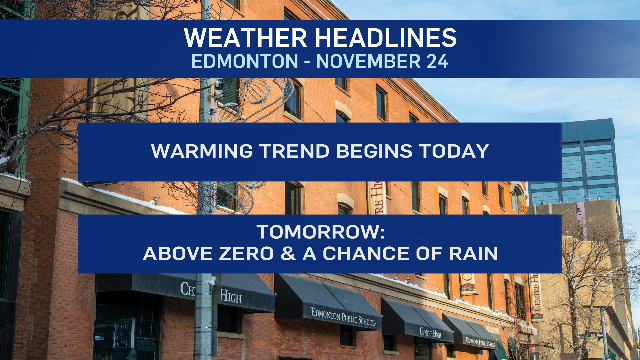 The melt will be back on in a big way Thursday and there's a good chance of some showers in the morning.

Parts of north-central and northwest Alberta will probably get some freezing rain. More on that in a moment.

Temperatures dropped into the -16 to -23 C range across the Edmonton metro region early this morning.

Those are the coldest temperatures recorded in the city so far this November.

AND...they'll probably be the coldest temperatures over the entire month.

Warmer air is set to move in and it'll stay mild/warm right through to the middle of next week (if not longer).

Today in Edmonton and area: light wind, some sunny breaks and temperatures climbing to around -5 C this afternoon.

THEN...we keep warming overnight and by Thursday morning, we're around zero as we head to a high near 5 C Thursday afternoon.

The problem is that the push of warm, moist air will likely produce some precipitation.

AND...because it'll be warm enough in the mid and upper levels of the atmosphere, that'll probably fall as showers in and around Edmonton.

Further north, the Peace Country and the Slave Lake/Westlock/Athabasca regions may get wet snow or a rain/snow mix.

Timing will be key and freezing rain is also likely in those areas with a smaller risk for Edmonton.

If you're planning on being on those roads early Thursday, think about postponing if possible.

In Edmonton, slick roads will be an issue for the morning commute Thursday regardless of what type of precipitation we get.

Plan to give yourself some extra time tomorrow morning.

We'll hover around the freezing mark Thursday night/Friday morning and then get a couple degrees above zero Friday afternoon.

As for the weekend, Saturday will be the cooler of the two days with a morning temperature around -10 C and a high just slightly below zero.

Sunday afternoon will likely be several degrees above zero again.

Thursday - Cloudy in the morning with a 60% chance of a few showers.

Slight risk of patchy freezing rain early in the morning.

Clearing in the afternoon.

Temperature falling to -7 in the evening and then rising overnight.

A fire ripped through a packed Coptic Orthodox church during morning services in Egypt's capital on Sunday, quickly filling it with thick black smoke and killing 41 worshippers, including at least 15 children.