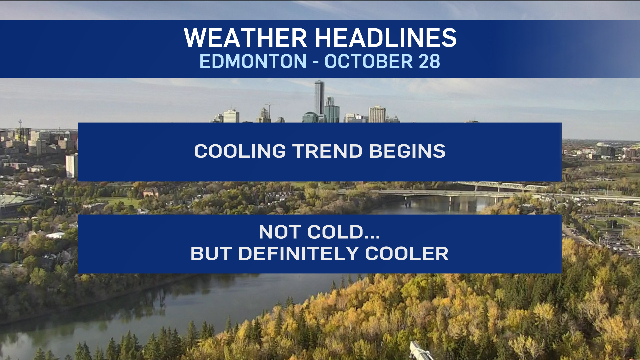 Some morning sun will give way to cloudy skies this afternoon and a daytime high near 10 C.

That's still several degrees above the average high of 5 C. But, it's down from the teen temperatures of the past few days.

AND...We'll slip even further in the coming days. Not COLD, but much more seasonal.

After a cloudy day Friday, we'll get some clearing in the Edmonton region Saturday and sunny skies for Sunday-Tuesday.

There's no sign of snow in the forecast for our region between now and the end of the first week of November.

That's not the case elsewhere.

Snowfall warnings are in effect for Banff and Kananaskis/Canmore regions.

Between 10 and 25 cm of snow is expected by the end of Friday with some higher elevations getting even more.

We'll probably also get some snow in Jasper (although, accumulation won't be as significant), Rocky Mountain and Calgary areas.

Calgary and regions to the south could pick up several centimetres of snow on Friday, so keep that in mind if you have travel plans.

Red Deer is on the edge of this system and will very likely get snow (heavier in the late afternoon/evening Friday).

Accumulations in the area could vary from 1 to 6 cm by late Friday night.

It'll be a dry and mostly sunny day across most of central and northern Alberta on Sunday.

Temperatures should hit a high in the 3 to 6 C range in Edmonton.

Most of northeastern Alberta will have highs in the 1 to 4 C range.