Edmonton weather for Sept. 21: Warm end to a warm season 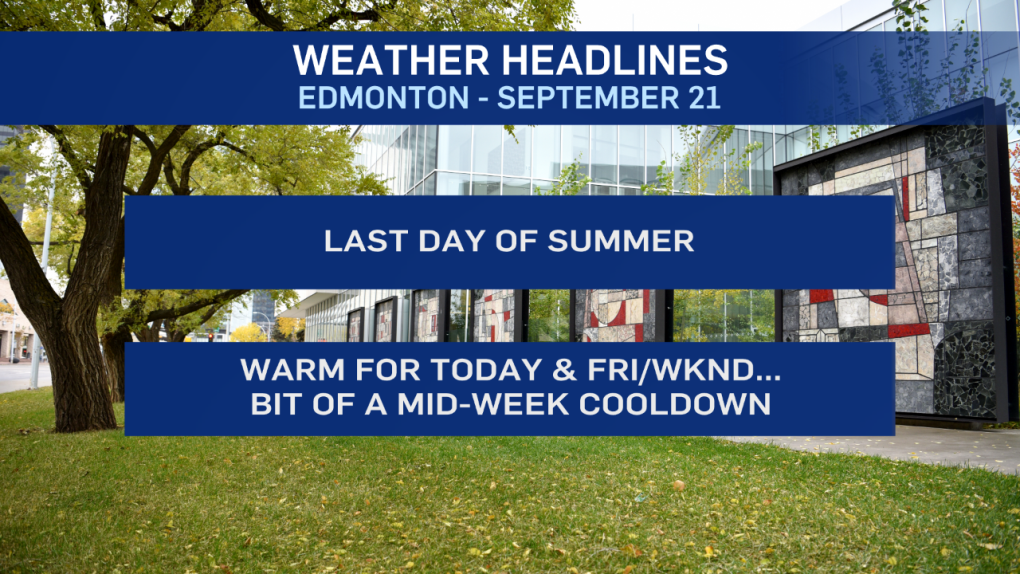 It's the last day of Summer and, fittingly, we'll end the season with a warmer-than-average day.

We'll get to a high around 21 C this afternoon. Morning clouds will give way to sunshine later today.

Autumn starts Wednesday and we're in for a short-lived cooling trend in Edmonton and the rest of central/northern Alberta.

Temperatures will top out in the mid-to-upper teens on Wednesday and then in the low-to-mid teens Thursday.

So...cooler...but it won't be COLD in the afternoons, especially because of the sunny skies.

BUT -- Friday morning's temperatures will likely slip close to the freezing mark.

Warmer air returns for Friday and the weekend with highs near 20 C all three days.

Today: A few showers will make their way across northern Alberta. Slave Lake to Fort McMurray are the most likely regions to get a bit wet.

Wednesday: Showers are possible in northwestern Alberta in the morning and then areas from Grande Prairie southeast to Red Deer will likely get some showers in the afternoon.

Edmonton and area DOES have a chance at getting a few scattered showers.

But, the risk of heavy, steady rain is very low. If anything, this'll just be some brief hit-and-miss showers.

Wednesday - Mix of sun & cloud. Slight risk of a shower.

An ancient Indigenous knife unearthed during the renovation of Centre Block will be the first artifact found on Parliament Hill to be returned to the stewardship of the Algonquin people who live in the Ottawa region.

Father of suspect in British MP slaying is 'traumatized'

The father of a man held for the fatal stabbing of a British MP during a meeting with local voters has told British media that he was shocked and 'traumatized' by his son's arrest, as police continued questioning the suspect under terrorism laws.

A group of 17 U.S. missionaries including children was kidnapped by a gang in Haiti on Saturday, according to a voice message sent to various religious missions by an organization with direct knowledge of the incident.