Halloween, time change and a big warm-up: This is your Edmonton forecast 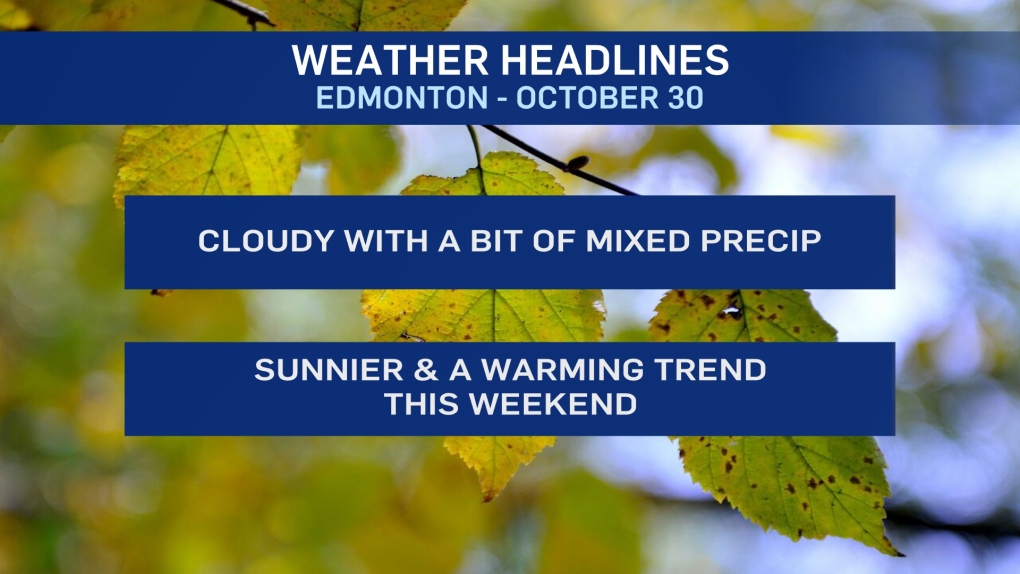 EDMONTON -- Occasional pockets of rain/snow mix in the Edmonton area early this morning.

Most of today should just be cloudy and we'll get to a high of about 7 degrees.

Then, later in the afternoon...a good chance of some scattered showers pushing through the region.

Further north, 5-10 cm of snow is expected from the Peace Country east towards Bonnyville.

The southern edge of that snow zone should be somewhere between Westlock/Athabasca and Morinville.

South of that line, no significant accumulation is expected.

The north edge of the heavier snow stretches all the way up to Fort McMurray.

Most of that snow will be done by late today in the NW.  NE Alberta may see it linger into early Saturday.

Partly cloudy skies for much of the province on Saturday with daytime highs in the 1 to 5 degree range across northern AB.

5 to 10 degree highs for central and southern AB.

Edmonton should get to the 6 or 7 degree range for a daytime high with a 10-20 km/h breeze.

Gusty wind is forecast for tonight, but it should ease by early Saturday morning.

Temperatures are still expected to shoot up into the 10 to 15 degree range in Edmonton and area Sun/Mon/Tue.

But, watch for the crash after. Daytime highs could go from the teens on Monday to below zero by Friday.