Josh Classen's forecast: Back to the 20s, turning wet tonight

Josh Classen's forecast: Back to the 20s, turning wet tonight 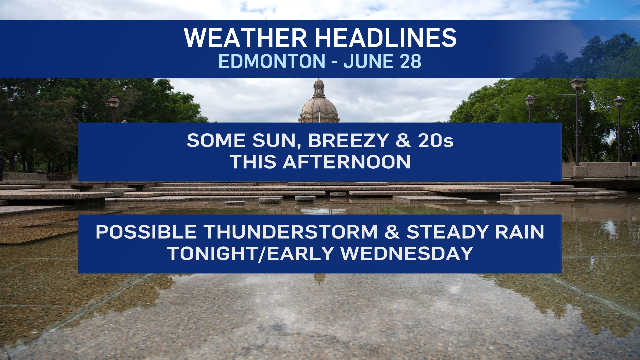 Warming up this afternoon with some sunshine...and then back to wet weather tonight and early Wednesday.

Temperatures should get back into the low 20s in Edmonton this afternoon with a high of 22 or 23 degrees.

After topping out at 19 on Monday, it'll be a return to "average" temperatures today.

But...it looks like we'll slip to a sub-20 high on Wednesday.

Showers and thunderstorms will develop in the foothills again this afternoon/evening and, unlike last night, those WILL sweep into the Edmonton region.

Timing for those showers and possible thunderstorms is mid-to-late evening for the Edmonton region.

Then...we have a chance of some steadier rain overnight and Wednesday morning as a narrow band of rain stalls out before slowly pushing back to the south.

That band will stretch west-to-east right across the province and areas stuck beneath it could pick up 50-60mm of rain.

Rainfall warnings are in effect for Hinton-Grande Cache and Whitecourt-Edson areas (as of 7am).

But...we're not as confident in where that band of heavier, steadier rain will be in central and eastern AB.

Is it right over highway 16? Or...is it a bit further north. Rainfall warnings will likely be expanded further east once there's more confidence on where that band will stall.

(That may not happen until this evening)

It certainly COULD stall out over Edmonton, or at least parts of the Edmonton region (at this point, the northern half of the area looks more likely).

I'm including a chance for 20-40mm of rain overnight and early Wednesday. But...because of how narrow this band will be...parts of the city could get 10mm while others get closer to 50mm.

The rain band will push south of Edmonton sometime Wednesday morning and then we'll see a few sunny breaks in the afternoon with a high of 18 or 19 degrees.

THEN...another round of showers/thunderstorms may develop north of the city and and slide through the area in the late afternoon/evening Wednesday.

- Good chance of a shower and/or thunderstorm late this evening

The longer-range outlook still has some warm weather for the long weekend, but I may have been too optimistic with yesterday's forecast.

I still think highs in the 23 to 28 range are likely. But, we're PROBABLY close to the lower end of that scale than the higher end.

We'll see how it plays out in the coming days and update through the week.

- mid 20s Sunday with a Mix of Sun & Cloud. There's a decent chance for some precipitation Monday that may move into as early as Sunday night.

Today - Mix of sun & cloud this morning. Sunny with a few clouds this afteroon.

Wednesday - Rain ending in the morning. Mostly cloudy with a 40% chance of a shower or thunderstorm late in the afternoon or early evening.

Friday - Partly cloudy. 30% chance of a late-day shower or thunderstorm.

A fire ripped through a church in a densely populated neighbourhood of the Egyptian capital of Cairo on Sunday, leaving at least 41 dead and injuring 14, the country's Coptic Church said.

Two-time champion Simona Halep has advanced to the National Bank Open's final. The Romanian beat Jessica Pegula of the United States in the WTA event's first semifinal on Saturday.