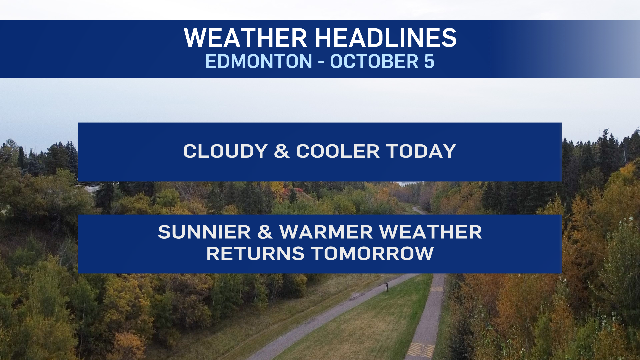 It's been about two-and-a-half weeks since we had a day as "cool" as today in Edmonton.

In fact, the first four days of October have all been in the 20s. That's the first time that's happening since 2008.

We have a front lying NW to SE across Alberta from the Peace Country through the Edmonton region and down towards Coronation.

Some showers have developed along that front and although we're not in for a day of heavy, steady rain...there's a chance we'll see a shower or two before the day's done.

The same is true for most of north-central Alberta.

Rain won't be the headliner to today's forecast, it'll be the cooler, cloudy conditions and then a bit of wind this afternoon (gusts near 30 km/h).

Smoke from wildfires north of Fort McMurray and in parts of northwestern Alberta have prompted air quality Advisories for the Fort McMurray region and the Hinton/Grande Cache area.

That smoke will be highly variable, even with those areas due to the wind over the next 24 hours. We're not anticipating the smoke becoming an issue for the Edmonton region.

Warmer air returns tomorrow and we're back to sunshine for a few days.

Daytime highs should be near 20 C from Thursday right through Monday.

Another cooldown looks likely for Tuesday of next week. But...we'll have a better handle on that in the coming days.

Wind becoming NE 20 gusting to 30 midday and this afternoon.

Thursday - A few clouds in the morning. Sunny in the afternoon.

Transport Minister Omar Alghabra says the upcoming holiday travel season is sure to be a busy one, but that he’s working with air travel stakeholders to ensure the summer’s flight cancellations and lost luggage problems aren’t repeated.

US knocked out of World Cup, loses to the Netherlands 3-1

Memphis Depay and Daley Blind scored in the first half and Denzel Dumfries added a late goal as the Netherlands eliminated the United States from the World Cup with a 3-1 victory Saturday that advanced the Dutch to the quarterfinals.

Russia rejects $60-a-barrel cap on its oil, warns of cutoffs