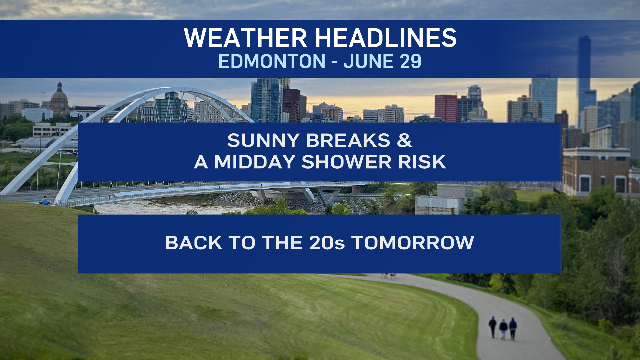 Rain moved through the Edmonton area overnight and delivered about five to 10 mm across the city.

As we discussed Tuesday afternoon, the band of heavier rain has set up and will stall out north of the Edmonton region through this morning.

In the city and surrounding areas, we'll get some sunny breaks this morning. Then, another chance of showers midday as the flow switches and starts to come from the north.

We're getting some steadier rain this morning in a line roughly from Grande Cache through Whitecourt, Athabasca and St. Paul.

Rainfall warnings remain in effect for the west end of that line, especially north of highway 16.

Sidebar: I mentioned it last night on air, but it's worth repeating: Hinton and Edson are under the rainfall warning, but only on a technicality and they won't get as Grande Cache, Fox Creek and Whitecourt areas.

That's because of the way warnings are issued. The forecast zones are: Hinton-Grande Cache and Whitecourt-Edson.

SO...Hinton won't get warning-worthy rainfall amounts, but Grande Cache will...and, as a result...both locations get the warning because one part of the forecast zone will be affected.

Back to the Edmonton area. As the line of showers north of the city starts to push back to the south later this morning, there's some question about whether it'll fall apart or remain intact.

There's no guarantee we'll get some midday showers in the city, but I think there's a better chance of seeing SOMETHING than NOTHING.

So...the morning's nice...lunch could get a bit wet...then back to some sunny breaks for the mid-afternoon.

Finally - we get another chance of some showers or isolated thunderstorms in Edmonton and north-central AB this evening.

That risk looks a bit lower than the midday possibility (at least, for Edmonton and area).

Temperatures will probably stay short of 20 C this afternoon. I'm going with a high of 18 C for later today.

But, that'll depend on whether or not we see some showers and when they hit.

We'll get back to the low 20s Thursday afternoon with a bit more sun. Just a slight risk of an isolated shower popping up in the area late in the day.

(I've left that risk out of the forecast for now)

The long-range outlook for the long weekend continues to trend cooler.

I've been talking about a range of 22 to 27 for daytime highs Fri/Sat/Sun.

But...just a day or two, I really thought we'd probably be at the higher end of that range.

That said - the outlook has been "evolving" quickly and some uncertainty remains.

Friday - Partly cloudy. 60% chance of a late-day shower or thunderstorm.

Three years after new rules came into force, the regulator overseeing Canadian airlines has not issued any fines related to passenger compensation claims for flight delays and cancellations.

Afghan man charged in killing of 2 Muslims in Albuquerque

A 51-year-old man from Afghanistan was charged Tuesday with killing two Muslim men in Albuquerque, New Mexico, and authorities said he is suspected in the slayings of two others whose deaths sparked fear in Muslim communities countrywide.

For the first time in eight years, Canadian warships are not involved in either of two NATO naval task forces charged with patrolling European waters and defending against Russian threats.

Experts voice privacy concerns over RCMP's use of 'intrusive' spyware