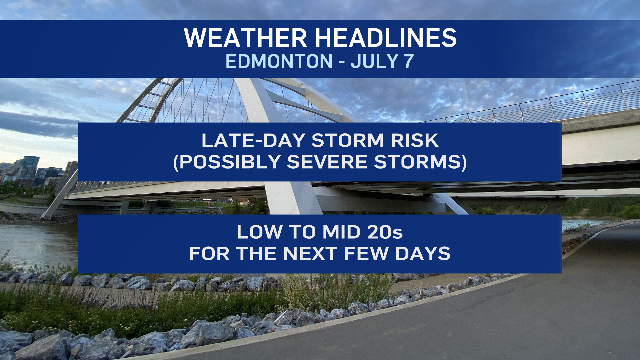 It's setting up to be a very active day across central and north-central Alberta with a high risk of severe storms late this afternoon and this evening.

As is always the case, most areas will not see severe weather and whether or not the storms are severe over YOUR neighbourhood (or over Commonwealth during the Elks game, etc. etc.) remains to be seen.

But...there will be some active weather from the Edmonton area south to Calgary this afternoon and this evening.

Then, the storm risk moves into eastern Alberta through the evening.

So...be prepared and stay aware of any weather alerts that get issued later today.

The main threat from these storms will be large hail and potentially damaging wind gusts. Heavy downpours with the potential for some localized flooding is also possible.

AND...we can't rule out the risk of a tornado.

Don't read that and immediately jump to the conclusion that we're guaranteed to see a tornado in your neighbourhood.

The potential exists over a very large area with Edmonton up on the northern edge of the risk zone and higher probability areas further south from around Red Deer east toward Wainwright.

We'll have an article on CTVNewsEdmonton.ca where I'll provide updates through this afternoon.

Aside from the late-day thunderstorm potential, it should be a decent day. Mix of sun & cloud with a high in the low to mid 20s (depending on timing of precip).

Partly cloudy and mid 20s on Friday with a risk of a late-day shower or thunderstorm (although, those should be a lot spottier than the activity we're expecting later today).

Still looks like we'll get some sun and low to mid 20 highs Sat/Sun followed by some heat early next week.

Today - Mix of sun & cloud. 80% chance of a shower or thunderstorm late this afternoon (risk of a severe storm).

Tonight - 80% chance of a shower or thunderstorm early this evening. (risk of a severe storm)

Friday - Partly cloudy. 30% chance of a late-day shower or thunderstorm.

Saturday - Sunny with a few clouds.

Sunday - Sunny with a few clouds.