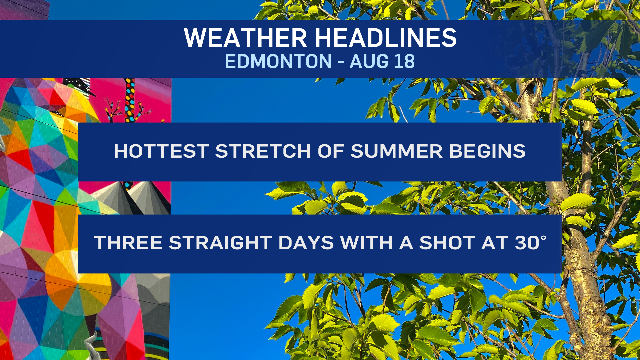 Sunshine and heat will dominate the forecast for the next few days and you can thank the upper ridge.

Or...you can curse the ridge if you'd prefer some rain and cooler conditions.

A heat warning is in place for almost all of Alberta with most areas meeting the criteria of: two or more consecutive days with highs 29+ C and lows in the mid-teens.

Temperatures have a chance of hitting 30 C for three consecutive days in Edmonton.

Up to this point, we've only had three days of 30+ all summer. So, this will likely turn out to be the hottest stretch of the summer.

In Edmonton, today will be our ninth consecutive day with a high above 25 C (the longest such streak this summer).

We had an eight-day stretch of 25+ C in July, but we'll surpass that today.

As for the extreme heat:

Are we guaranteed to hit 30 C each of the next three days? No.

But, there's a good chance. Realistically, we could be anywhere between 28 C and 31 C for a high today.

Sunday's still looking to be in the upper 20s in the afternoon.

AND...Tuesday-Friday should all have afternoon highs in the mid to upper 20s.

There is no significant (measurable) moisture in the forecast for the Edmonton region over the next three to five days.

The next best chance for the city looks to be a slight possibility of a late-day shower or thunderstorm on Tuesday.

It's also looking pretty dry for the next few days across east-central and northeast Alberta.

West and northwestern Alberta (foothills up to the southern Peace Country) will get some hit-and-miss showers/thunderstorms late Friday.

Tuesday - Mix of sun & cloud. 30% chance of a late-day shower or thunderstorm.

A shocking video shows the devastating impact of post-tropical storm Fiona on the town of Isle aux Morts, N.L., as the sea overtakes land and scatters wood, tires and boats across the beach.

Despite warming temperatures, Arctic lakes are disappearing – here's why

According to new research, 82 per cent of the Arctic has gotten drier over the last 20 years and the reason why could come as a surprise.

Storm chaser: Powerful hurricanes are not just an American phenomenon

Out of 24 hurricanes Mark Robinson, a meteorologist, has tracked, post-tropical storm Fiona was the most intense Canadian hurricane he’s seen and he’s warning these storms are not just American phenomena.

As Maritimers assess the damage left behind from post-tropical storm Fiona, a number of comfort centres have been made available for residents to get food and water, recharge devices and receive up-to-date information. Here is a list of the comfort centre locations announced so far.