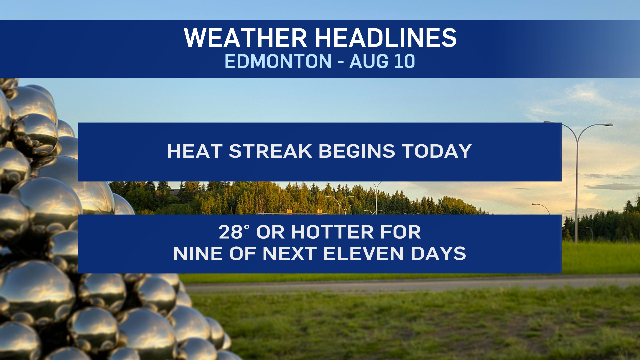 After two days in the mid 20s in Edmonton...temperatures are set to ramp up for the next week and a half.

Daytime highs are expected to be 28 C or hotter on nine of the next 11 days (that includes today and runs through to next Saturday, Aug. 20).

The other two days are forecast to be around 25 C (Sunday and Monday).

So, there won't be much break from this late-summer heat.

It's unlikely that we'll break any daily record highs in Edmonton, though.

The best shot would be Friday because the record is "only" 30.4 C.

The Thursday/Saturday record highs are 32 C and 33 C...so I think those should be safe.

We'll see what happens next week. It look very likely that we'll have highs near 30 C or in the low 30s for Wednesday-Saturday next week.

In fact, the upper air pattern is shaping up to be even warmer next week than this week. It's a ways out and that pattern could change, so I'm trying to stay conservative with the long-term forecast.

But, if that does in fact play out as the models are suggesting, we could be near 30 C for highs these next few days and in the low 30s for a few days next week.

We did have a line of thunderstorms around 1 a.m. along highway 43 from just northwest of Edmonton up past Whitecourt.

Those storms weakened and we lost the lightning as they moved northeast. But, the Westlock/Barrhead area and the Smoky Lake area got some scattered showers EARLY this morning.

We also have some showers in the Drumheller/Coronation region this morning. Those should push out by midday.

Edmonton gets a chance for a shower or thunderstorm tomorrow.

There's a slight risk in the morning and then a bit better chance around 6 p.m. and/or early in the evening.

Areas south of the city between Leduc and Red Deer have a higher probability of seeing a late-day storm tomorrow.

After that, late Saturday has a chance of some late-day showers or thunderstorms in parts of central and north-central Alberta.

Whether or not that'll hit the city or not remains TBD.

Slight risk of an isolated shower early in the day.

40% chance of a late-afternoon or evening shower or thunderstorm.

Saturday - Partly cloudy. 40% chance of a late-day shower or thunderstorm.

Russia vetoed a UN resolution Friday that would have condemned its referendums in four Ukrainian regions as illegal, declared them invalid and urged all countries not to recognize any annexation of the territory claimed by Moscow.