Josh Classen's forecast: Mild weather stays (but not for long)

Josh Classen's forecast: Mild weather stays (but not for long) 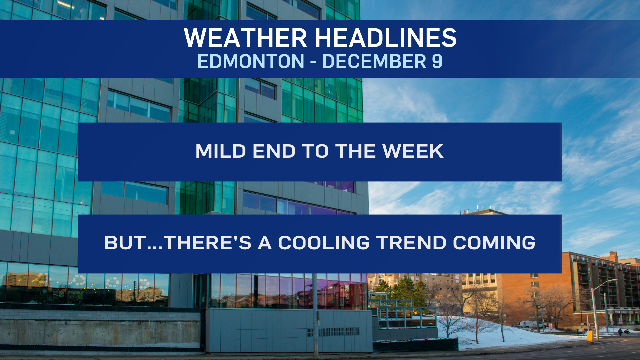 After hitting highs of -2 C on Wednesday and -4 on Thursday, we're in for a cooling trend over the next few days.

Temperatures should still be near average today and only slightly cooler tomorrow.

But, we'll have temperatures dropping through the day Sunday AND some wind AND probably some snow falling.

Let's start with today. Temperatures are on the mild side this morning and we'll climb to about -5 C or -6 C this afternoon.

Much like yesterday, we'll hit that high around 2 p.m. this afternoon and by 6 p.m., temperatures will slip back to around -10 C.

By mid-evening, Edmonton drops into the mid minus teens and we'll probably hit our low late this evening (instead of early Saturday morning).

Temperatures are expected to rise slightly after midnight.

So, another mild morning Saturday giving way to a high around -7 C mid-afternoon. Wind should be light throughout the day and cloudcover will increase late Saturday.

There's a good chance we'll see at least some flurries Saturday night/early Sunday morning. Whether that turns out to be just a dusting or 2-4 cm is still uncertain.

That incoming system WILL help hold temperatures up Saturday night and we'll start Sunday in the -10 C range before dropping to around -15 C in the afternoon.

Wind looks like a bit of an issue as well, probably in the 15-20 km/h range and possibly with some gusts.

By early next week, we're not back into a DEEP FREEZE, but we WILL be about eight to 10 degrees colder than average for daytime highs.

Temperature falling to -16 late this evening and then rising overnight.

60% chance of flurries in the evening/overnight.

Sunday - 60% chance of flurries or light snow early in the morning. Then...Mostly cloudy.

Temperature slowly falling through the day and breezy.

A gay man issues a court challenge over Canada's policy restricting sperm bank donations, a Quebec woman is surprised to find her stolen car had been used in brazen Ontario robbery, and actor Ryan Reynolds drops by a Toronto college and surprises students. Here's what you need to know to start your day.