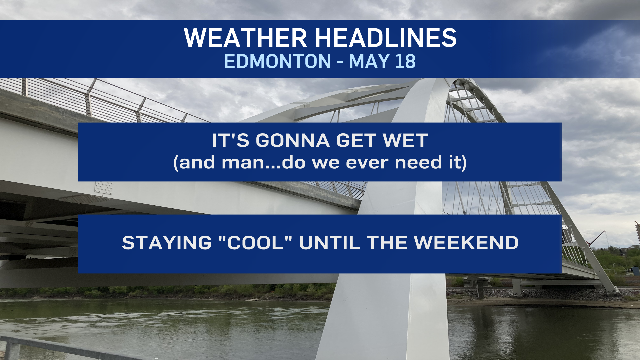 Morning sun will give way to clouds by midday and then some showers and periods of rain.

The showers should move into the Edmonton region by mid-to-late afternoon.

The heaviest, steadiest rain will be this evening and overnight.

That is welcome and much-needed moisture in the city where we are WELL below normal for precipitation this spring.

Officially, the city has only measured 17 mm of precipitation since the start of April.

Average precip for the April 1 to mid-May timeframe is 51 mm!

We're at about one-third of that going into today.

If you just look at the month of May, it's even worse. The average for the entire month is 46 mm.

Most of the city and surrounding area should get roughly 5 to 10 mm of rain.

Again, the steadiest rain is expected to fall tonight and will probably push out of the Edmonton region by early Thursday morning.

We'll be cloudy with just a slight chance of a few showers tomorrow morning.

Then...a better chance for the redevelopment of some showers (possibly a thunderstorm) Thursday afternoon.

Parts of east-central Alberta will likely get 10-25 mm by mid-day Thursday (especially around Vermilion-Lloydminster).

Rain will transition to a rain/snow mix in areas from Red Deer south to Calgary Thursday morning.

The foothills and mountain parks get snow Thursday morning, turning back over to rain later in the day.

The cooler air will stick around through Friday.

We're expecting a high near 13 C early this afternoon in Edmonton.

BUT...the long weekend should have a warming trend.

Mid-teens Saturday afternoon (although, we'll wake up to temperatures near 0 C Saturday morning).

Highs in the the 16 to 21 C range for Sunday/Monday in the city.

Thursday - Cloudy. 60% chance of afternoon showers, risk of a thunderstorm.